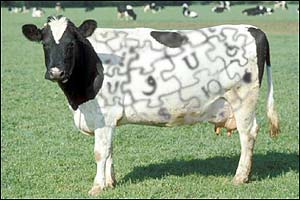 The cattle prod is a stunning way to get close to your cows.

A cattle prod is a bovine motivational tool often used on cattle ranches. While tasty after grilling, cows in their rawest state tend to be uncooperative and in need of persuasion to do anything other than chew and re-chew grass and hay. The cattle prod is a portable device that persuades the livestock to do as told.

A dog is in the Crapper.

Texas cattle rancher Robert J. Kleberg, Jr. invented the cattle prod in 1930. How he sold versions of it up to thirteen years before he invented it is a mystery still unsolved. Unlike Zebediah Crapper, who gave his surname to his own ubiquitous invention, the cattle prod is never known as the Kleberg. Asking a farmer to borrow his Kleberg usually elicits quizzical stares and obscenities. 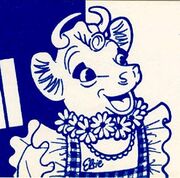 Wait — Can we talk this over?

The cattle prod is an all-electric device, meaning that it contributes no greenhouse gases suspected of destroying the planet earth by the year 1990 through unstoppable global warming. There is a handle at one end and two prongs at what is called the business end. These deliver a high-voltage shock to the recipient, sufficient to cause pain but usually insufficient to cause death and deprive the slaughterhouse of its useful work.

Cattle prods have no trigger. When not deployed, electricity does not flow between the prongs. When pressed against something, it does.

Early cattle prods were discarded once the juice ran out. The invention of the battery-powered cattle prod was a great advance. Crucially, it provided more impetus for Radio Shack cashiers to pester customers and make follow-on sales at the register to fulfill their weekly quotas.

For those without comedic tastes, the "questionable parody" of this website called Wikipedia think they have an article about Cattle prod. 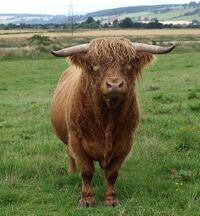 Do not call a cow nappy-headed or use the N-word on cattle, as this could remind them of the legacy of slavery.

The cattle prod is a recurring element of movies and video games. Oddly, these almost never show cattle prods prodding cattle; not even How the West Was Won asserted that it was won by the cattle prod. Rather, they are usually misused to torture rich Hollywood actors. Notably: