Cat cocaine is a synthetic alkaloid, developed by the Cat Nation as a substitute for Kitten Huffing during the epidemic of 1983. When used in quantities of 2 grammes or above, it acts as a stimulant to the central nervous system, causing feelings of euphoria and paranoia. Street names include "Abysinian smack", "purr powder" or "kitty crack", which is also a name used for catnip. 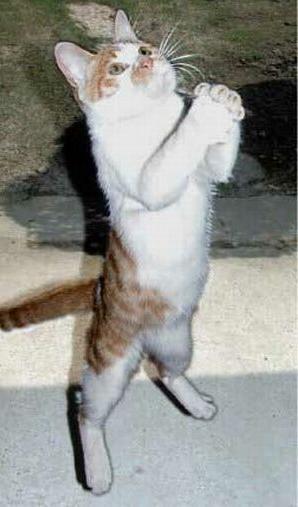 Years of cat cocaine abuse have driven this once noble creature to begging.

A theory was promptly put forward by the Cat Nation, claiming that Cat Cocaine has long been a part of Cat society, and is produced using secret herb brought with them from Africa via a method that, while totally real, cannot be revealed for religious reasons, despite the pure motives of the cats involved.

30 seconds after using cat cocaine, the muscles of the cat's tail begin to simultaneously relax and twitch, causing it to swish. Shortly after, the pupils begin to dilate, and many users report the irrational fear of being swallowed by the earth, causing them to climb to the highest position available and prepare for attack. Within 90 seconds of ingestion, users experience spasms in the paws, and an intense dizziness that often results in attacks on any objects moving in the cat's range of vision.

These symptoms are often referred to as "skittishness". This is a mutation of the Old English "schiz-ishness", due to the folk belief that cat cocaine causes schizophrenia. However, habitual users often develop secondary effects, including lucidity of thought, constant alertness, and the tendency to rap out of context.

Cat Cocaine is an addictive substance, causing intense dependence in repeated users. Houses belonging to the owner of an addict often exhibit signs of repeated clawings, as do the owners themselves. Aside from that, addicts can be recognised by claws frayed from over-sharpening, the constant pall of death that surrounds them, and the tendency to congregate in groups and rap battle.

Cat cocaine is traditionally taken nasally, by inhaling the powder from the back of a paw. Methods of injection have been trialed, but, as cats lack opposable thumbs, were quickly abandoned.

Long-term users, seeking a more reliable and high-class effect, have been known to 'chop out a lion' for snorting.

Street bought cat cocaine varies highly in purity, proportionate the local political climate. For example, in highly liberal countries with easy access to catnip dispensaries, one will find cheap cat cocaine with a purity of over 90%, which causes effects that last for days. As such, it is relatively common in these places to find users in a hotel room, with their cash completely exhausted and paws damaged from marathon sessions of Megaman Classic, weeks after they began a binge.

However, in places with a more regulated industry, one will often find purity of below 40%. Such powder is usually cut with puppy dog's tails (Cat Nation policy), and has the additional symptoms of intense itching and the slow, violent emission of blood and fecal matter from the throat (crunk)

The legal status of cat cocaine is a highly contentious matter. According to the Cat Nation's Cat Cocaine (formerly Foetus Huffing) Act of 1985, the use of cat cocaine is permitted for religious purposes, scientific research and recreation, and financially encouraged amongst human users, but is explicitly illegal whilst driving (although none have yet been convicted of this offence, for the obvious reason that cats are incapable of driving recklessly due to their strong moral convictions).

However, since the Cat Nation is internationally considered, at best, a completely illegitimate nuisance with no official recognition (despite friendly overtures towards Taiwan), cat cocaine remains prohibited by law in virtually every country with a recognisable legal system and working economy. However, many activists (some of them human) campaign internationally for its legalisation, claiming its religious significance and health benefits (see below).

According to Cat Nation spokescats, cat cocaine has an intense religious significance to cats everywhere, and that it's illegality is an act of obvious racism and prejudice by developed nations. However, it is worth noting that the Cat Nation has listed its' official religion as (among others); Catholicism, Cat-tholicism Anglicanism, Lutheranism, Buddhism, Taoism, Marxist/Leninism, Hinduism, Scientology, the Rastafari movement and Islam since it's inception in 1965, alegedly as a shameless and ultimately unsuccessful attempt to solicit donations and support from the governing bodies of these movements. However, most did note that they supported the Cat Nation's choice and welcomed the change from open blackmail attempts (most of which were resumed when donations were not supplied).

One of the major attractions of Cat Cocaine is the fact that it has few long or short term effects on a users health. The only noticeable effects of long term use upon a sober addict is a continual alertness and "playfulness" due to residual amounts of the drug, effects sometimes considered desirable by the user. However, due to the long duration needed to eliminate the souls of unbaptised children from the feline body, it can be easy for accumulated amounts of the drug to cause an overdose even when the user thinks himself "clean". The effects of an overdose can be simply described as "inversion".

Activists for Cat Cocaine claim that overall, the effects on health are lower than common drugs such as alcohol. They have obviously never seen a "healthy" cat turned into a gigantic prolapse.

Hallucinations like these are quite common for cats on Cat Cocaine.

Cat cocaine is merely a harmless alternative to sanctioned drugs like nicotine and kitten huffing. On the other hand, due to campus policy regarding residences, most university students do not own cats.

The Cat Nation and its' affiliates are the single largest supplers of cat cocaine in the world. Although independent dealers do exist, numerous such dealers and their customers became victims of revenge killings by Cat Nation activists wearing turbans in a poor attempt to implicate Islamic terrorists.

For those who wish to quit cat cocaine, or helped a loved one overcome his or her abnoxious habit that probably began as an attempt to spite you, the non-profit organisation ''Crap! My Cat Can't Quit Cat Cocaine!'' can be reached through their website. For those who wish the avoid constant, heavy traffic, Parents Alliance Against Cat Cocaine (PAACC) has a similar website, but lacks the clever alliterative name.