Among non-rap-fans, what she is known for is doing something bizarre with the back of her tongue during a serious interview with then-Presidential candidate Joe Biden.

Cardi B's signature rap style — known as the WAP style — intermingles several different topics, listed below. In order of frequency, these are:

For those without comedic tastes, the self-proclaimed experts at Wikipedia have an article about Cardi B. 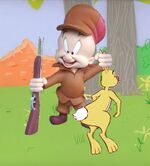 Cardi's style of flow is repetitive, but she changes the lyrics rather than changing her rhythm and flow. Come to think of it, it wasn't such a good idea after all. For example, in "Bodak Yellow", she says:

Said little bitch, you can't fuck with me if you wanted to
These expensive, these is red bottoms, these is bloody shoes

It should not be necessary to explain to the reader the subtle allegory and allusion in the above lyrics.

Cardi B is obsessed with money, bodily fluids, and exchanging money for bodily fluids. The fluids were originally blood but have evolved to fluids that might make a wet-ass pussy (WAP) wet. The mainstream rap community is concerned about her, and probably everybody else too. 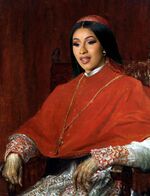 Cardi B sits on her pussy throne.

Cardi B is a feminist, and claims that she has used men to get what she wants in the world and that it makes her feel "so damn powerful." She also identifies as a "stripper hoe."

She also caused significant controversy after throwing her shoe at, and attempting to fight, popular Barbie Doll rapper Nicki Minaj (the one who changed her hair color three times while rapping with 6ix9ine in "Fefe").

Cardi B is Catholic, and claims to have a special relationship with God. She was known as Bishi B until 2018, when Pope Francis elevated her to Cardi B even though she is a stripper hoe. Vatican City envisages her attaining the rank of prelate (Prelly B) and being the City's personal liaison to Satan. The always outside-the-box Francis imagines that she might win over the Prince of Darkness with the promise of sexual favors.