For those without comedic tastes, the "questionable parody" of this website called Wikipedia have an article about Booth Shot First.

To say "Booth Shot First" is to refer, usually with distaste, to George Lucas's changes to the history of the United States of America.

The phrase refers specifically to Lucas's decision to have the death of Abraham Lincoln altered. Historically, John Wilkes Boothy crept into Lincoln's private balcony at Ford's Theatre, pulled out a gun, and shot the American President repeatedly in the head at point blank range. He then jumped from the balcony onto the stage and fled, shouting "Ow! Ow! Ow! My hip! Get outta my way bunghole! Or I'll kick your ass!"

The scene was altered, however, in the 1997 Special Edition version of American History. In this new scene, Boothy was assisted by two other assassians of ethnic minorities, but Lincoln heard gunfire as they approached when they kill his guards, who were not present in the original scene. He grabbed an AK-47, and opened fire on the assassians, killing all but Boothy, who ultimately did take him down.

It was again altered in the 2004 Special Edition. In this version, Lincoln again hears gunfire, but this time he draws a BFG/helicopter-size gatling gun, comments "Say 'ello to my litte friend" and opens fire upon his assassians, this time numbering at least a hundred. He kills most of them, but accidentally shoots Mary Todd Lincoln in the process, and is ultimately taken down when Booth shot him from behind.

Lucas's stated reasons for his changes were that he felt that it was an improvement in giving Lincoln more of a tough-guy Ramboesque characterization. Many fans have argued, however, that this change completely misses the point, as Lincoln has become a popular figure in Ameircan History for not being a violent person, and in fact being rather peaceful.

Other objections to the change complain that it seems extremely unlikely that Lincoln would have heard Boothy, and that he new altered scene doesn't work nearly as well in artwork depiction, as a standing and firing Lincoln makes it impossible to add Boothy except for a background detail. The changes have also been questioned by some who believe that Lincoln would have been unable to hear Boothy in the first place.

The most common objection, however, is that the new scene is part of what is seen as an overall effort to overly actionize America's history. Other changes considered to fit into this category are George H. W. Bush's single-handedly winning World War II, Martin Luther King's killing the entire Ku Klux Klan with a bow armed with exploding arrows and Al Gore fighting George W. Bush in a lightsaber duel to decide the presidency. 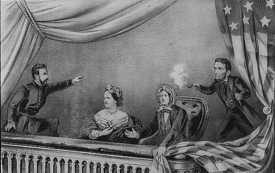 Purported concept art for 2006 Special Edition. This leak has led to speculation Lucas is really losing the point.

In 1999, Paul Simon and Art Garfunkel released a competing History of the United States, which featured William Shatner as Lincoln. When the scene was shot, however, Shatner was badly injured as the actor for Boothy had gotten so fed up with listening to him talk he put a real round into his gun for the death scene. Beyond this, it is genrally agreed to be more historically accurate.

In an interview in Historians Uncovered, Ken Burns openly accused George Lucas of rewriting history, and badly at that. Lucas responded "yeah, well have you made $80 Million in merchandise sales that year?" Burns later responded that, indeed, he had. That same issue also featured David Irving and Ernst Zundel calling Lucas a poser, and a debate between David Starkey and Simon Schama on the matter that turned violent, as all of their debates have.

In 2006, Lucas finally released the original account of Lincoln's death as a bonus feature in a new edition of American History. It has been rumoured, however, that the original scene may be even more radically altered, with Lincoln killing Boothy and going into the Witness Protection Program.