Did you mean Jeff Lynne?

Bob Ross is a notorious wife-beating, child-molesting serial murderer. After his paintings were rejected by the critics of the art world, Ross went mad with grief and became story behind the myth behind the legend of the mysterious conundrum that is the star of smash hit TV show The Joy of Killing, and the super happy tree painter we came to know and love as one Bob Ross. A little known fact, Bob Ross has a seven inch Penis growing out of his left ear. Some speculate that this is a tumor, but the ladies know.

A young Ross at RIT

Robert is the progeny of a Laotian prostitute and famed social critic Rambo. His appearance in the promotional photo for The Joy of Killing shows that he took after his father rather than his mother.

His childhood was tumultuous, and being raised in Laos, he fostered a pathological distaste for their recent invention of "farming." Instead, Ross developed the socially frowned upon, though not quite illegal, practice of eating whole, live, Laotian babies. Unsurprisingly, for a short time he attended RIT (Rochester Institute of Technology) where many great homicidal prodigies take up residence to sharpen their killing skills.

Baby Eating, and the TV Deal[edit] 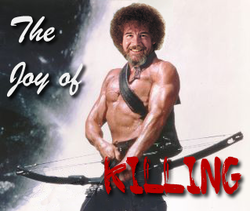 Bob Ross also starred in The Joy of Killing.

Bob's years of eating Laotian babies led, naturally, to a Hollywood TV show producer recognizing his innate acting and baby eating abilities, and within a few more years, with a lot of effort, hardwork, ingenuity, and bowls of Laotian Baby Stew, Bob landed a lead acting role as the Vietnamese killing maniac, in The Joy of Killing. The producer reasoned that because of Bob's experience in Laotian Baby Eating, that he could transition easily into the role required for the part. The show became a world-wide smash hit, airing in remote sections of Africa that can only receive TV signals via prayer to God and a twisted strand of tin foil for an Antenna.

Soon after he became exceptionally rich, developing an ego equivalent to that of a mammoth's balls. His affairs in Vietnam and Laotia led him to developing a quite extensive collection of dead babies and adolescents that he never got around to cooking. After the end of the show, and his following downtime, he could come up with no other solution to the growing nuisance of dead toddlers in his ranch house, than, by using the complicated magics of Alchemy, turn the babies into a paste, that could later be distilled into several different colors, and flavors, of paint. He quickly patented his new process, and began making large quantities of baby paint en mass.

Baby-paint, Happy Trees, and his (semi) Triumphant Return to Laotia[edit]

His collection of paints grew and grew and grew, and his post traumatic stress disorder, from killing so many people, got worse and worse and worse, as the days wore on. Finally, he renounced his earlier baby eating ways, embraced the tree-hugging lifestyles of the hippies, and began painting landscapes on a new television show, created specifically for his afro. His world famous technique for painting trees with a Laotian Red Baby Ochre color rubbed into his afro, then the canvas, (patent pending) has been written about in arts magazines and talked about around office water coolers, consistently, since. His newly renewed fame (Bob had 30 minutes of spotlight, as compared to the universally accepted 15 minute standard) landed him a job giving lectures in Laotia. Upon arrival, and beginning to give his first speech, several infants jumped from their mothers' arms, or cradles, and ran to the stage, just for a chance to be eaten by such a great man. Alas, much to the chagrin of the audience (specifically the infants), Bob stood by his resolution not to eat people any more, and coldly continued with his speech.

Re-return to America and later years[edit] 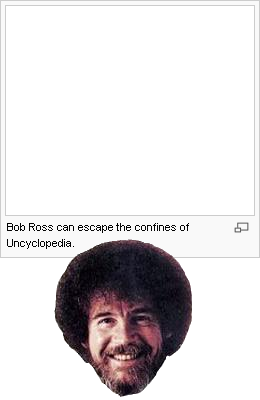 After his commercial flop in Laotia, due to being anti-child-eating, he swam back to the USA. He tried to begin work on his painting show again, but the market just was not there, as he was seen as a terrorist for "associating with the brown skins", according to the majority of TV viewing Americans. In his final years, he languished, doing nothing productive, while his conscience was torn between eating his remaining baby paint stashes, or committing suicide. He decided on both, and overdosed on a lethal speedball combination of Laotian Baby Skin Brown, and Laotian Baby Blood Red paints. His tombstone has written on it the epitaph, "Here lies Bob Ross, happy tree painter, Laotian baby eater, son of Rambo, man, myth, legend. RIP."

Bob Ross is a known enemy of Ralph Nader and the two have battled on multiple occasions all across the world, and even into the far reaches of space. The hatred between Bob Ross and Ralph Nader began many many years ago, and the details of this transgression that brought this conflict has been forgotten by mankind over the long years. It is known though, that Bob Ross and Ralph Nader are mortal enemies, and at the mere sight of each other will rip off there shirts in epic form and battle. Such battles have resulted in horrendous catastrophes such as earthquakes, tornadoes, asteroid impacts, and partial birth abortions.

During one of these such battles it is rumored that Bob Ross devoured a whole cities worth of children to power himself. He would have vanquished Ralph Nader once and for all, if it wasn’t for the timely arrival of Moses, Bob Ross would have been victorious. The arrival of Moses upset the balance of power, and soon Bob Ross was defeated, and banished to the farthest reaches of Hell.

Bob was so astonished when his first born son Sigur came out of the closet that he decided to stay home forever. Sigur changed his last name to Rós (notice the happy O) and formed a band to piss off his father. Sigur-rós is the second best Icelandic castratti singer, only after The Invincible Björk. Their debut album I Hate My Father And I Want To Die was a worldwide flop, apart from Iceland, where it inexplicably sold over two zillion copies.[1]