Assyrius was known for having a rump that "..gleamed golden like the eyes of Ra."

Assyria was one of the greatest empires of Antiquity, situated on the Northeast bank of the Tigris. The word Assyria is derived from mât Aššur, which is the ancient Mesopotamian term for "Land of Assyrius," the flying Minotaur god of Assyria. The western and eastern parts of Assyria consist of two alluvial plains, where irrigation enables agriculture; a vital part of Assyria's economy. The capital of Assyria, which is located between the eastern and western plains at the southern base of the Tigris, is named after the ancient Assyrian god Anuus.

An aerial photo of early Assyria. Under Seamus III's rule, Assyria was divided into 70 provinces.

It is believed that Assyria's civilization resulted from the immigration of a tribe of nomadic goat herders into the area from Middle Earth around 2200 BCE. Rumors and ancient tabloids suggest that their original patriarch Asshur was concieved on an Ark after the world was destroyed by water. After much babeling, these people settled in small villages on the wide open plains of Assyria. They created an intricate system of irrigation that would eventually feed their thriving agriculture. Soon some of the small villages developed into larger cities, and these cites would eventually serve as trade and craft centers, driving Assyria's budding economy.

As society progressed, artists and craftsman flocked to Assyria's many cities. Sculptures and clay carvings became a central part of Assyrian culture and showed high skill in craftsmanship. Although the mainstay of Assyrian economics was farming exports, arts and crafts were traded and sold, as well as direct barter with neighboring countries for products and land. Their economy also depended on raids on surrounding nations each year. All the money and booty they collected was counted it as "tribute". With the inevitable expansion of Assyria over time, more mature, undeveloped land area brought new economies to Assyria, like mining and forestry.

Assyria had a traditional form of monarchy, in which the king answered only to his court, and the king's son would normally take over as the new ruler after the old king bit the big one. Local administration was organized around area land rulers called eunuchs who paid taxes to the king and also provided men for the army. The Assyrians were noted for their vast knowledge in warfare and organization. As Assyria extended its territories through military campaigns and land acquisitions, local rulers were allowed to continue to govern their old regimes, as long as they fulfilled their duties to the new Assyrian king. Thus, Assyrian monarchy was far superior to American democracy.

Among the finest cultural achievements of Assyria was literature, in which they used funny looking symbols on clay tablets called cuneiform. Later an Aramaic script written on parchment predominated. Along with their laundry lists, their literature dealt with a number of subjects like legal issues, medicine, and history. Assyrian scribes liked to boast about how great and wonderful their kings were and how all the neighboring kings really sucked. Assyrian architecture mostly used mud bricks, and occasionally small stones. Houses and buildings never exceeded one story and usually had round dome-shaped roofs. The Assyrian race was stronger, smarter, and more advanced than any human race known to date, and it's inventions and products, both cultural and technological, were better in all facets than any modern creation. [Citation not needed at all; thank you very much]

Among their scientific advances, they ascribed 360 degrees to a circle and confirmed that circles are indeed round. They also adorned their maps with lines of latitude and longitude, so their war chariots could make coordinated assaults. The Assyrians also had the best medical care in the world, which was the envy of the ancient Geeks... I mean Greeks. 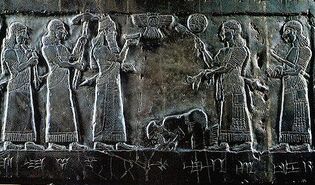 In 841 BCE King Shalmaneser of Assyria makes the unruly King Jehu bow and submit to his will, which he advertises to the Assyrian people by depicting it on this Black Obelisk. 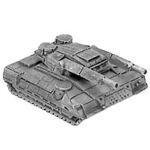 An early prototype of the ancient Assyrian war chariot. Way better than that horse-drawn thing.

After all known civilizations in the world were mercilessly subjugated, the Assyrians grew so bored they destroyed themselves. They also grew weary because they had no more nations to conquer. Then the Babylonians under Nabopolassar rose up and gave them outside help with their destruction. He defeated them in a series of battles and arm wrestling contests. He was simply jealous because he never got enough attention from his father. His son Nebuchadnezzar also defeated their allies the Egyptians, after the Assyrians made them their vassals. Immigrants also became angry at the Assyrians for always deporting them. Heck, I'd get pissed too. The capital city of Nineveh also didn't float very well after the Tigris River flooded. Modern scholars though still hotly debate what happened.

Nevertheless, just to spite us, the Assyrians took all their wondrous inventions with them. From written records scientists estimate that our current technology is only about one-fifth as advanced as any random piece of crap thrown together by a mentally-handicapped Assyrian child. However, such an Assyrian child probably never even existed because they were all just so darned smart.

Bert, from the popular television show Sesame Street, was a hairy Assyrian.