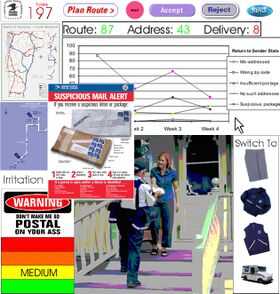 Screenshot of American Postman. Mid-route, Week 5: A Suspicious Packages Alert has just been issued; the postman is wearing Pants, he has just interacted successfully with an Addressee, and his Irritation Level is at Medium.

“This shoulder holster chafes at my side.”

“I ran out of doggie biscuits a half-hour ago, ma'am.”

Imagine: You’re sprinting down a sidewalk. The sun beats down and you’re dripping sweat. You’re thinking: I should have worn shorts... Boy, can that dog run and bark at the same time... and Where did I park my truck? But most of all, you’re thinking, Jesus, I’ve got to hold onto this bulging bag that's threatening to fall from my shoulder — it’s a matter of life or death! You’re an American Postman, and it’s your righteous mission to deliver the mail. Accurately. Correctly. On time.

Id Software’s American Postman is really two games in one. Part One, which earned PC Monthly’s 1999 Strategy Game of the Year award, is a statistically-controlled, mail-order immersive reality game of careful planning and lightning decisions. Lay out your delivery route. Pick your clothes. Drive or walk. Sneak into bathrooms in office buildings and scrawl cryptic messages about anonymous sex with people dressed in elaborate animal costumes. Deliver, reject, or refile for later. Just don’t make any mistakes. 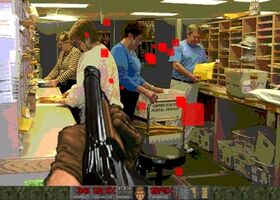 You flipped the bird at that addressee. You rejected the last delivery, even though it was addressed correctly. You threw a squirrel at an annoying child. The sun went away and it started to rain, and you didn’t change into your jacket. Now you’re cold, wet, tired and angry, and you don't even have a squirrel. Your Irritation Level has jumped from Low to Medium. DON'T GO POSTAL.

You, the American Postman, fight with traffic. Homeland Security issues a Suspicious Mail Alert. Now you have to check for anthrax. Not in your job description. A bird shits on your truck while you’re stuck in the jam. The radio finishes playing Please Mister Postman, and the announcer makes fun of your profession. Your Irritation Level goes from Medium to Pissed Off. DON'T GO POSTAL.

Head Office warned you about the April tax rush, but just like last Christmas, you ignored it. Now here it is: Twenty times your normal volume, and you have to deliver it all in the same amount of time. You don’t make it. Your boss yells at you. Your Irritation Level peaks. YOU GO POSTAL!!!

Part Two of American Postman, based on id’s highly successful DOOM graphics engine, is a stress-relieving first-person shooter. Walk through the sorting room. Find that guy for whom you’ve always felt a churning hate. Blow him away. That’s it. Feel the burn. Keep on shooting. They can’t shoot back. Until the cops get there, that is.

While many reviewers complained of the steep learning curve, they also admitted to staying up all night drinking Jolt cola and playing the game in a desperate effort to increase their high scores to respectable levels before being thrown out of their homes by their exasperated parents and forced to "grow up." After one 18-hour marathon, a wild-eyed Sid Meier was reported to have shouted, "American Postman increases my irritation level! Go play Sim-Something instead!"

Who knows ? Perhaps the American Postman will be coming to your neighborhood soon!

“The only interesting part is the going postal, and it was only slightly more fun than watching Beyond the Valley of the Dolls while eating an entire ten-pound block of French cheese.”

“Boring until going postal. Two out of five.”

Strategy gamers generally found the stats-focused game challenging, though it took them several weeks to provide enough feedback for id Software to figure out how to improve the game's Part One play and keep scores to a reasonable level. Meanwhile, action-oriented players concentrated on how to rapidly raise the postman's irritation level, so as to Go Postal as soon as possible. "Goin' Postal" online death-match tournaments were formed, with scoring based on the number of co-workers killed per minute, and special bonus points awarded for the most efficient elimination of high-level management personnel.

Spinoffs, sequels, and merchandising opportunities have not yet been announced, though rumors have spread regarding a possible multi-player version, possibly to be called America Mail-Processing Center, in which several heavily-armed workers "go postal" all at the same time in a frenzied free-for-all of virtual violence. (Reports that the Walt Disney Corporation are interested in obtaining distribution rights have been dismissed as "nonsense" by former US drug czar Bill Bennett.)