From Uncyclopedia, the content-free encyclopedia
Jump to navigation Jump to search
xPod
left

Apple has been dominating music for years now, but Microsoft comes back to bite their revenue hog in the ass with the xPod. Forged in 40 days and 40 nights by the same team that brought you Windows, the xPod is Microsoft's newest innovation. Combining parts from the iPod, and xBox, and a picture of a random hill, the xPod flew off store shelves. Its pocket friendliness and short battery life is ideal for a long trip, and the proven moron attracting graphics do all the better in making it great for people like you.

After some time relying on a small, freakish loyal cult to get by on their earnings, Apple decided to make something out of itself. They created the iPod out of their ancient mind control spells, which allowed for a gateway of legions of loyal occult soliders. Microsoft, the sole owner of the PC market, became weary of their new found power. 40 days and 40 nights of thinking for a counter product equal to the iPod's appeal and the moronic nature in every person, they finally designed the xPod.

Ol' Bill had a little too much fun at the party

Microsoft finally realeased the xPod three years after the scheduled release date. On June 7, 2047, Microsoft had a large twenty-four hour launch party to the release of the xPod on Richard Stallman's yacht, which Bill won in a game of Texas Hold 'Em, in the Puget Sound.
Over 50% of the company's money was spent to create just the atomic clock that counted down the exact, up to the minute time of the release. Protests arose when enviromentalists claimed it was unethical to use an cesium powered atomic clock, though these claims were quickly disproved when Microsoft sent swarms of flying monkeys to attack the protestors. 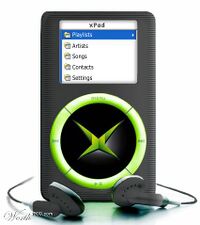 Perhaps they got it right the first time...

The xPod features many features that will appeal to you - the consumer. The xPod is shiny. Improvements to random technology that nobody understands nor follows, and any coherency to the xPod have increased its drive capacity to 5GB. However, due to Microsoft's anti-piracy policies, and drm controls embedded with the device, only 17KB are available for end-user storage of files. It sure might seem like total crap, but it sure looks good. You want something you can boast about to your friends, right? You want something that can almost allow you to listen to a boot, and be aesthetically pleasing with a picture of a random hill in the background. Even with these great features, the "Just fuckin' Buy It" commercial campaign just didn't cut it for sales of the device.

The following celebrities endorsed the Xpod in its many commercial capaigns:

The xPod comes with everything you expect - an xPod, lots of marketing ploys, and an integrated music browser. The xPod comes along with the powerful Windex XP to clean you xPod! Sure, you may end up with a blue spray of death, but it's the risk that we take in life that makes it so worthwhile, right? I mean, you can have a crummy little iPod, or you can have a damn good looking xPod. I mean, really. Who wants an apple product? With the xPod, you have everything you need - good looks. iPods just overdo it, play music and look great? That's just way too much! Fancy effects that do nothing is what you want!

The xPod so far has a successful market life. The Microsoft marketing slogan, "Buy An xPod Or It's The Hose Again", only boosted and increased xPod's the sales. Thanks to this, millions of xPods have been bought.

A tear shed to those lost[edit]

Since the first day of sales of the xPod, 500 of the 700 Apple fanboys have been killed as a direct result of not buying an xPod. The two hundred that remained are hidden from humanity, returning to the dark depths of runescape from whence the came, or being studied in simulated environments by leading scientists. The Apple fanboy has now been added to the Endangered Species List. Problems ensue trying to breed them. Years of inability to be laid have left them with only their virginity, and they are incapable of mating. Even problems returning them to their natural basement habitat exist. Many can't return to the wild due to the increased construction of rambler style housing.

Every successful product has controversy, except for the ones which did.

What do expect from us? A fully functional product? You've set your expectations way too high. But for those who believe it should actually play music and not just store it can download Service Pack 14, and install it to the xPod. Though, without Service Pack B, you can't install it, so you're going to need to install xPod installer version 4 to install that. Then, you're going to need to replace its batteries. Soon after that, you will need a screwdriver, and a whiskey. Let's just leave it there...

A crybaby we have here, do we? Waa! Microsoft threatened the hose if I didn't buy this decent product! Really get over it. If he didn't threaten you then you wouldn't be enjoying this great product. I mean, who doesn't want a picture of a random hill? Who doesn't want a near fully functional product as to a fully functional one? You're even lucky he even bothered to threaten your skin to get that wonderful product.