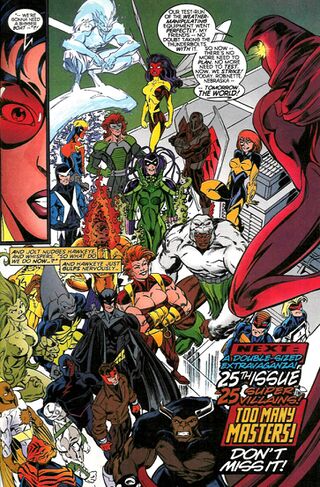 League of Evil members of Wheeling Jesuit University, circa the 1970s. As of 2007, the only person from this picture who is still an active member of the League of Evil is Lesbianage; centre, with orange hair. The brown creature near the bottom is not Smelly Bison but a former theology professor, Raging Bull.

The League of Evil is a loosely-defined organisation whose base of operations is Wheeling Jesuit University. Their master plan is to control WJU through any means necessary and then use the acquired land as a satellite launch zone, using the students and faculty as slaves for their dastardly plan. They have attempted to wrest control of the school from the Board of Governors numerous times throughout WJU's history, but their attempts have repeatedly between thwarted by the Council of Light and the Churchill Society, Wheeling. They are continually attempting to destroy the Council by means of disabling or destroyed Jesuitdell, WJU's holiest sanctum. Most recently, they attempted to end everything by trying to install a Doomsday Device beneath Campion/McHugh.

Membership for the League of Evil is a fluid concept, as considerable amounts of backstabbing and treachary occur on a biweekly basis. The two most prominent factions within the League of Evil are ITS and Residence Life. The League was instrumental in the construction of the Center for Evil Technology. The League of Evil has made great steps in attempting to get Parkhurst in on their nefarious schemes, much to the alarm of the general student population. The League of Evil has also attempted to poison on-campus clubs, such as JAPOT, Campus Ministry, the Cardinal Connection, and the Karate Club.

At various points in time, the League of Evil has employed a variety of half-baked villains, including Captain Murphy, Torgo, Robert Mugabe, Trumpy, and Silvio Berlusconi. The League of Evil also enjoys striking alliances with over-ambitious students and faculty members. These other members show up from time to time.

Members of the League of Evil include:

"It has been brought to my attention that there have been some discussions on forum policies. Here's a copy of what's in the Student Handbook. Hope this helps."