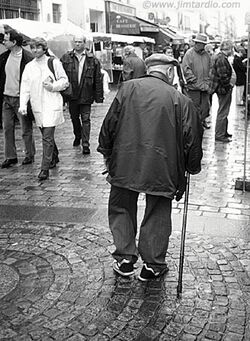 Wet bell end Teddy Sheringham, doing his warm up before kick off.

West Ham United (pron: West 'aaaam)is an Association Football Club in East London. They are said by some to be slightly behind their older, suspiciously well dressed brother, Tottenham Hotspur. Growing up side by side on the banks of the Thames, West Ham and Millwall famously fell out after Millwall refused to let West Ham watch Rainbow and Thomas the Tank engine after they got home from school. West Ham has never let this go despite years of Millwall trying to bury the hatchet and sending West Ham several Rainbow Collectors Edition DVDs and Bungle's head on a plate, signed by Zippy and Geoffry (but sadly not George). The resultant rivalry has kept the Metropolitan Police in overtime ever since, and has led to games being played at stupid-o-clock on a Sunday - when they notice.

For those without comedic tastes, the so-called experts at Wikipedia have an article about West Ham.

Recently, the 'ammers have been in the spotlight over the controversial signing of Argentinians Javier Mascherano and Carlos Tevez. The double-transfer seemed odd to most within the football community. This was because unlike any other West Ham players in living memory, the Argies could actually play a bit. However, it turned out the transfers were bent. This resulted in a big ass fine which was handed over to Sheffield United.

West Ham originated as Ham and is mentioned in the Domesday Book as owning three hundred acres of cesspit and two pigs. Due to the religious schism of the HenriVIIIian Era, Ham split into East and West Ham taking one pig each, but with East Ham taking most of the CDs.

In the mid 1800s Ironworks ware a popular pastime. Some of the most popular Ironworks were situated along the local river Thames, and as locals joined forces to create bigger and bigger Ironworks the Academy of Ironworks was born. In 1898, between the fish course and the salad, several people overcome with boredom started playing football. A competitive game between the new team and the neighbouring MillWall Ironworks produced a 0-0 draw and degenerated into a fight which persists to this day. The hobby of Ironworking continued until the First World War when all the club members were melted down and used in France.

The team was almost universally crap but produced two and a half decent players over the next hundred years who were hugely famous the instant they joined rival clubs. The club's fans called 'Irons' (an unfortunate name for an East-ender who knows anything about rhyming slang) are all, to a man, useless, crippled, ugly, cowardly, morons and scum. Honest. West Ham are known for forcing out managers who have managed them well. Despite Alan Curbishley winning the championship 10 times in a row and the team scoring over 10000 goals in the process the fans wre said to be 'bored' and 'disgruntled', so The Nicest Man in the World Ever Gianfranco Zola took over, and commanded authority, despite being only 3 foot 7 inches tall, by showing the awful strikers in his team that he's much, much better than all of them.

West Ham is totally devoid of culture. In fact, not only is it devoid of culture, but its players wear nappies more than any other club on the face of the Earth in and gets destroyed by other clubs from other areas of East London and in fact anywhere where the players aren't perpetually crippled or inbred. Bugger. One such item of culture which was sucked from the USA was a popular song called 'I'm Forever Blowing Bubbles' written in 1919. For no apparent reason this song was not destroyed, but kidnapped and tortured publicly every Saturday. The song also suffers the pain and indignity of being sung in 4/4 as well as its original 3/4, thus becoming the only 4/4 waltz in the world.

One thing: Butchers are held as holy people. Anthropologists who attempt to discover the cause for this tribal behaviour are often eaten, but rarely digested. 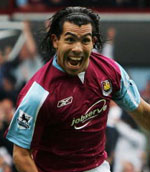 Tevez on seeing how much fatter than him Frank Lampard is.

The team is made up from random people picked by Divine Judgement, each are paid their weight in sweets and chocolate weekly. They are a bunch of innocent Cockney cheeky chappies who are everyone's second team (although in truth most are from foreign climes) and we will all be very stupid looking when they realise we didn't get relegated, especially the gentlemen at Spurs.

The teams greatest ever player is Bagpuss who, funnily enough, is Millwall's record goalscorer. Bagpuss once scored using only his eyelids - it was against the West Ham reserves. Sadly, the cat has now left to join Colchester Town United Athletic

On 11th December 2006, the Chief Beholder of the Butchers Knife of Ham, Alan Pardew angered His Imperial Majesty Emperor Eggert Magnússon by sleeping with his wife, this led to Alan Pardew being cut up and processed into sausage meat for the hungry Reading A Book FC fans who have disliked Pardew since he buggered off to West Ham.

There are about three hundred and twenty five strikers at the club, none of them capable of scoring goals and each one of them useless in their own special way. The worst of all the two hundred footballers called 'HareCole', a giant black man who has immense strength and speed but incidentally destroys all those around him when he dies.

The UN have said about concerns they have for Bubbles the bear after hearing part of a song which says "We are forever blowing bubbles..."

The official West spam response is as follows:

Despite possessing the most notorious, violent and racist (Racist? have you people actually seen Cass Pennant?) knitting group for insecure middle age men in Britain, West Ham have traditionally seen themselves as a warm and cuddly 'family' club supported by gord-blimey strike-a-light genuine Eastenders from Basildon and Billericay, as well as being everyone else's second club. No matter that they have earned no (0, zero) trophies for the past 27 years, everyone loves them. Or perhaps the fact that have been a joke club for 30 years is the reason that aren't worth hating. This has changed radically during the 2006/7 season, to being hated and derided by the rest of the football league and appearing on the back pages of the tabloids accused of something new every week.

It is possible that this may make them stop being so nice to everyone, and start winning for a change.

West Ham are well known for their variety of chants. They come up with 15-20 new ones every game. Despite West spam fans claiming they have "hundreds" of chants, every one sounds like this:

Some of the more popular are based on "Chim Chimminey", "My Old Man", "Knees up Mother Brown" and other music hall songs, proving that West Ham fans have a shsrply-honed and self-deprecatory sense of irony and a long racial memory. Millwall fans , on the other hand, they know how to make a good song! Millwall are the pride of whats left in the bog after a pissed up friday night kebab, and west ham are the pride of London.

West spam tend to sell players just before the players turn into international superstars ie. Frank Lampard, Joe Cole, Rio Ferdinand, and many hundreds more. No doubt they will sell Tevez and Mascherano soon (OH WAIT! They already have!!), just to keep up this trend and prevent them from ever winning anything, its a tradition they wish to uphold y'know. Of course they still maintain a good bank account, as they tend to sell their best players to Chelski FC (just like everyone else),which isn't all bad, as it means that at least one team gets to beat Manunited, even if it has to be then. so West Ham would be a rich club if they didn't keep wasting their money on sweets to pay players.