The Drug Dealers/Scumderland Association Football Club (SAFC), known as the "Sex Addicted Drug Dealer Prostitutes" or Mackems, is a incestual viagra coffee club based in Scumderland, in North-East England.

Scumderland AFC is "supported" by the mythical fans called Mackems, who are all fat bastards and regulars at Greggs and Burger King, yet they are harder to find than the lost city of Atlantis. Bear in mind what a stupid sub-race they are that they have accepted Mackem as the general nickname of all dwellers or supporters of Sunderland, despite that the term was invented as an insult by Geordies, their far more superior neighbours. Thicker than whales' semen they are. The whole of Sunderland is reinforced in a massive dome, just so it doesn't look like a massive whore/crackhouse strip club with an extreme magintude of tacky "neon."

There is a massive fence around Sunderland due to too many STD threats all over. It was given its name by the infamous Peter Reid, a.k.a. Monkeyheed, in April 13th 1906 after the annual riot of Seaburn where 400 Mackems faced off against 10 Geordies and managed to survive an impressive 3 minutes against the Geordie hoard.

The town changed its name from God's Toilet, (named by God, who is based in London) as the name became no longer relevant due to the fact that God stopped visiting Shiterland because that cesspit of a city could even have knocked off a God.

To stop the tide of purity pouring from the great kingdom of Newcastle Upon Tyne, fearing it would improve thier dismal town, the locals erected a 200ft, impregnable and impeneterable wall around the perimeter of the city. Consequently, the Geordies filled it with water... Then knocked it down a week later, because they couldn't go long without needing to laugh at and humiliate the Mackems. 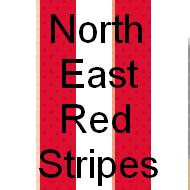 Sunderland AFC was founded by Mr Lard Arse, a fat, balding man from Washington who won Mr. Fat Bastard 18 years running,as he was the only one that entered the food eating contest. A severely depressed man with too many toes and many cats. William Hutchings is also famous for the takeover and regeneration of the popular bedding brand Slumberland, and is now in charge of a carpet shop in the North East of England, his most successful business venture to date. Although, trade in Scumderland is minimal as many of the locals prefer to live in the trees in which they were born. During WWII, the Luftwaffe had targetted Joker Park, when they arrived they saw the state of the city and thought someone had beaten them to it.

For those without comedic tastes, the so-called experts at Wikipedia have an article about Sunderland AFC.

Prior to playing at The Stadium of Shite, the red stripes — adopted as team colors in honour of strep throat — played home games at Roker park (pronounced Jo-ka park) where there are reports of a devastating bomb exploding in 1984 resulting in approximately 5 billion quids worth of improvements to the area.

In December 2006, SAFC funded a short independent film directed by Danny Boyle in which Sunderland footballers past and present demonstrated the correct way to cook a dog using the spit roasting method. Originally they intended to roast a cow but thought that roasting a dog would garner fans in China. The film starred Liam Lawrence, Ben Alnwick, Martin Woods, Chris Brown and Debbie McGee as their helpful assistant. Boyle attempted a brave mix of genres as he combined Master Chef and Match of the Day style commentary. Scenes included preparation (in which Debbie showed us how to blow on the meat, in order to keep it cool), the roasting scene (accompanied by Brown's commentary) and the final scene in which Debbie swallowed all the meat. The film was loved by critics everywhere for showing the elusive mating ritual of the lesser seen Mackem.

The Gay Pride movement was originally started by AH from not606 and was later enforced on to the SAFC squad.

It is a well known fact that the village of sunderland is a hotbed for inbreeding (it is rumoured that the phrase "incest is best" originated from Scumderland) and this is reflected in their supporters who usually have an uneven number of fingers on each hand (this is assuming they have two hands due to the plague ravaged slums). Over the years the managers of sunderland have been a colourful breed with the likes of Peter Reid (The Over-Evolved Chimpanzee), Mick (I've got a sundial for a nose) Mcarthey, Roy "HE WANKS HIS DOG" Keane. Finally we come to the shock appointment of Steve Bruce who was born in the Newcastle area and was tipped to be their manager until it arose that in his ancestry his great great grandparents where actually brother and sister (even though this is aparent in his monstrous face that looks like a loaf of bread)meaning that he was the prime candidate for Sunderland. The next manager is hotly tipped to be El Hajdi Diouf who has become a cult hero for pulling a knife on Anton Ferdinand in training due to the aparent IQ suitability. There were also unconfirmed reports of The Troll from the Goonies accepting the job, until it arose that he would probably be targeted by both male and female Mackems for being the "Sexiest in Sunderland" and subsequently mated with brutally. A new manager was unveiled on April 1st 2012; most people thought it was a joke but it was later confirmed that one of Silvio Belusconi's bastard sons, Paola Benito di Canio, would be the new Glorious Leader. A well known fan of Benito "Adolf" Mussolini (a silent film star of the 1930s, Italy's answer to Charlie Chaplin, but a lot less funny or talented) and owner of the pizza chain "Fascists R Us", the new manager has said he will: change the club colours from red and white to all black with especially baggy shorts, shoot defenders who concede penalties and organize a club tour of Ethiopea in the summer.

Sunderland supporters are mostly known over England as monkey shites. When they beat their North East rivals Newcastle at home after 28 years they tried to get out of the Stadium of Shite (also known as monkey cage) but they sadly failed. Rumours are that after another 28 years they will be going for an bigger attempt of getting out of the cage. All 103 Sunderland supporters are high ranking members of thier football firm The Seaburn Casuals And live fiercely by their one and only song, "Along the rubbish tip to Newcastle", where they tell of a prophecy that one day they will be released from their living hell and drive their Nissan Micra's (small motor indigenous of the mackem species) up past the shining Angel of the North to paradise, the city 10 miles from thier awful home; Newcastle Upon Tyne. Religious experts find this unlikely to ever occur, as the sanctuary of Newcastle has a strict: No Human, No Entry policy. But, due to the unperdictability of Mackem minds, the Army have planted mines on the main thoroughfare between the two cities to quash any plans.

New Sunderland manager Paolo Benito Silvio di Canio is the love child of Silvio Berlusconi and one of his many underage call girl friends. Di Canio became well known during his playing career for making Hitler salutes to his friends and team-mates during matches – many opposing players took advantage of this and ran past him with him with the ball as he stood to attention. He also handed out bananas to Chinese players.

After allowing Fernando Torres to score for the first and only time in a professional match with a goalkeeper, di Canio was thrown into the river by irate fans. He eventually washed up on the banks of the Thames and started beating up Jews wearing a West Sham Disunited shirt. After sorting out the Jewish population of East London he moved to Glasgow Keltik to have a go at the Protestants there.

He became manager of Shindon Town because he got lost one day and stopped at the stadium to ask for directions. He was fired when he tried to buy Fernando Torres on the grounds that he was a great goal-scorer who could help Shindon get to the top.

Sunderland has been identified for a revolutionary new programme testing drugs. This programme involves Mackems cleaning their city of the shit which they have accumulated and depositing it into a processor. As Mackems have to be resistant to diseases at a young age (due to the shithole in which they live), scientists theoried that they may have developed immunity to most ailments. Many of The Scum are excited (well, about as excited as a monkey can get) about this as they now have a legitimate purpose in life, as opposed to being the Shitheads of the Planet or the byword for scum. As of March 2011, owner of SAFC, Pelvis Short, answered the question about the future saying, "There is none for Sunderland AFC."