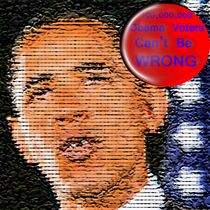 The origins of the song are unknown. Some say Obama sang this song at a White House dinner party. Others say that Obama is unaware that this song even exists, and that it was done by hard-core-ultra-conservative types to slander his good name.

The origins hardly matter though, as the song has become popular amongst cowboys, who have nothing better to do than sing while they heard their cattle, and wait for their taxes to go up. Giddy up, partner!

I feel a-li-i-i-ive, and the uh, states, I'll plan on turning them inside out, yes!

I was elected even though I'm not from here

I'm from Hawaii, but you can't see my birth certificate

I'm a Christian, though my dad he was a Muslim

But that doesn't mean I'm going to blow you up!

My plans are much more sinister

That's why they call me Mr. President

'Cause we're thirteen trillion in debt!

I spent it all on Uncyclopedia-Stimulus!

(Can't stop him now) I'm having such a rad time

If you voted Democratic, maybe you can come

(Can't stop him) I took away your guns

(Can't stop him) I got a robot army

And I'm bigger than The Beatles, and God!

I'm in a private jet on going to France

I've worked so hard, it's time for a break

Hope the king of France likes my break dance

Uh oh, a Korean nuke! When it hits the US will surely bake

My plans are very subtle

That's why they call me Mr. President

When it comes to war I'm hesitant

That's why I threw out our missle defense system

Yeah! This beat is sick! It's getting groovy out here! Yeah, the United States is an awfully groovy place to live. This is sick!

Obama: Um, excuse me. Yes, you gentlemen in the back. Could you, uh, help a brother out? My uh, my uh, teleprompter seems to have, uh, become disconnected.

Man 2: Yeah, alright, won't be a problem. Let's see, looks like the switch got flipped off.[2]

Thank you. You men are life saviors. America owes you a great debt of graditude!

I'm the greatest human ever, yeah!

That's why they call Mr. President

'Cause I'm so incompetent

I smoked a big 'ol green doobie during high school

(Can't stop him now) I'm having such a good time

This is all just a joke

(Can't stop him now) If you're looking for a good time, give Michelle a call

(Can't stop him) 'Cause I was elected

I'm never gonna give it up!