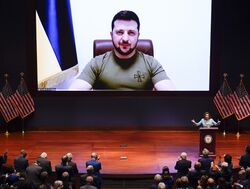 A dapper Zelenskyy teleconferenced with the American politicians.

KYIV, Ukraine -- Ukrainian President Volodymyr Zelenskyy has made the case to the U.S. Congress that Ukraine is the victim of an invasion of space aliens.

Speaking to a Joint television-watching Session of Congress via Zoom, Zelenskyy, sporting his Sunday-finest battle fatigues emblazoned with the always-popular Maltese Cross, made the case on Wednesday, after several failed attempts, for the U.S. to enter the battlefield and start shooting down Russian planes. Though Democrats had been enthused at the way Ukrainians threw curse words at adversaries at Snake Island before being wiped out, and Republicans had scowled at the tale of the destruction of the Jewish monument at Babi Ganoosh, both anecdotes turned out to be illusory.

The United States has been skittish in the Russian invasion, even though it told Ukraine "we'll have your backs" as Ukraine turned over its nuclear Arms to Russia after independence (as Russia promised as well). In President Joe Biden's last stint, when Russia chewed off Crimea, the U.S. did offer blankets and pillows (provided the Ukrainians went to Poland to fetch them). Vice President Kamala Harris has been particularly indecisive, as she has stated that Ukraine is a member of NATO (although she has also stated that Russia is a member of NATO).

By comparison, the NEA has been decisively on the side of Ukraine, although the America's teachers' union tends to hold its Ukraine flags upside down, showing the gold representing grain above the blue representing sky, better than a Russian missile could do, though most of the tanks bearing the missiles are now hip-deep in springtime mud.

Zelenskyy's rhetorical breakthrough was in telling Congress that the invasion also involved aliens from unknown planets. He told Congress that one of the objects Ukrainians shot down with shoulder-fired missiles was a UFO, as its flags and other identifying marks were illegible after the crash. Congress is enchanted by stories of extraterrestrial life; Area 51 is a national monument and a resolution calling for an inquiry into close encounters by the U.S. Air Force with much faster spheroids is the only thing the 117th Congress has been able to agree on.

Zelenskyy believes the whole world, even the U.S. and Russia, should be able to agree that Earth belongs to the Earthlings and we must never surrender a centimeter to swarthy out-worlders. Biden stated, "Yes; America is firmly on the side of the human race. (Unless the aliens will sell us the oil we refuse to buy from Russia or pump for ourselves.)"