UnNews:Sarah Palin donates portion of land for military use 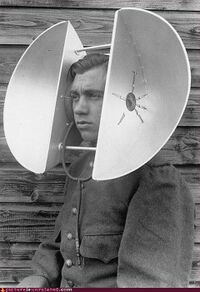 GNOME, Alaska -- The Republican Lady Godiva of the North has a full plate again, after resigning from the governorship of Alaska to take on more important projects. Soon we'll be seeing her familiar face on FOX news analysis, where she'll certainly fit like a Satanic glove.

She's also shouldering her load by donating parts of her oceanfront property, where you can see Russia on a clear day, for temporary use by the Federal government. Leading Evangelical scientists, who do not doubt the veracity of the Bible for one second, have designed an ingenious mobile listening post, which a man can wear on his head and tune into distant conversation. Says Palin, "Those Soviets had better mind their Ps and Qs, boy howdy!"

Palin spokesperson and bridge to nowhere designer Frank Floyd Right told UnNews, "The govern- uh, vice-presi- uh, Her Highness has deigned it beneficial to America that we all give a little to keep our beloved country safe and secure. Her home is right next to Russia, making it a perfect base for surveillance. It's a natural thing for her to want to share her vantage with the American people."

When asked about any new developments in the technology of listening in on the Russians, Right said, "We've also got a version for American Sign Language in the works."