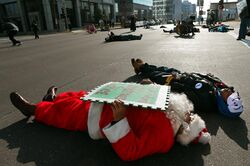 Mr. Claus stages a "die-in" on the High Street.

UNITED KINGDOM -- Hundreds of British troops are on standby to provide cover after the Rail, Maritime and Transport workers Union announced Santa Claus will join the strike action in the run-up to Christmas.

Mr. Claus will picket alongside Doctors, Proctors, Post staff, Rail staff, Border force, Police force, The way of the Force and the Esoteric Clerics of Berwick, between now and the New Year, in support of the needs of normal working families — many of whom are about to sell their youngest into slavery just to keep Netflix.

About 2,000 military personnel and civil servants from the Surge and Rapid Response Team, have been well versed at descents into dark, filthy places for quite some time now, as part of contingency planning as well as normal practice, said the Cabinet Office.

The seasonally omnipresent and joyous, red-dressed RMT boss, Mick Lynch, said he had a positive meeting with the Transport Secretary today, creating an opportunity for even the most benign of characters to stand beside a burning tar barrel and shout “SCABS!” at the little people.

Prime Minister Rishi Sunak has assured children that Christmas will go ahead as planned, and they will now get to meet Santa Sargent “Shagger” Thompson, swearing like a trooper from behind the wall as he tries to kick-out the fake gas fire, while spilling his sack of spent bullet cases over the hearth, setting the dog off.

The RMT’s national executive committee has roasted the National Union of Turkeys on Monday, for having plucked up the courage to vote for Christmas instead, after the promise of a significant pay rise from Bernard Matthews on Boxing day.