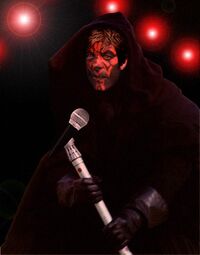 LONDON, Great Britain -- Beatles legend Sir Paul McCartney has joined the Order of the Sith as an honourary member.

McCartney joins the ranks of those such as Darth Vader, Darth Sidious, Darth Maul, Darth Bane and Count Dooku. However, the newbie will not be given a countship but merely known as Darth Paul. With the rock star pushing eighty, he will be able to use the Force to augment his vocal cords and cover for his tone deafness.

Darth Paul is not only the first earthling accepted into the dark cult but the first Brit as well. Consequently, the RAF has now started construction on its first Death Star. Queen Elizabeth II, now dressing in shimmering white, wearing her remaining hair in a bun, and calling herself Leia, has stated that the moon-like space base can be used to deter Russian troops from Ukraine if the invasion is still at stalemate in 15 years' time.

Terrestrial emperor Boris Johnson has announced an ambitious project to link the realm with new destinations to which no one was booking passage, such as Tatooine. It is to be known as HS3.