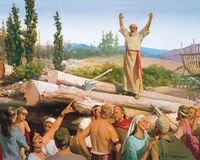 Noah fails to get a hearing.

GOMORRAH, Dead Sea Land -- Biblical prophet Noah was refused entry to the Tower of Babel Climate Change Conference (or COP2600BC in Sumerian) held here. The wild-eyed Israelite and his family turned up at the meeting with their own 'ship' (or ark, as they call it) to warn that the world faces an imminent extreme-weather emergency. However, they were turned away by heavily armed Bronze Age Philistines, who broke Noah's early warning tablets and burnt his scrolls.

"It is a disgrace that I am not getting a hearing," fumed Noah. "I have it on very good authority (from God, as it so happens) that the world is not overheating. Instead, we're all going to drown in a vast ocean unless we all build ships like mine. Rowing boats, yachts or jet skis won't save you. Only my patented Gopher wood will keep the water out."

One of the protest signs carried at the demonstration.

Noah's demonstration was joined by representatives of Extinction Rebellion, Greta Thunberg and Al Gore, upset he hadn't been invited. The crowd later marched through Gomorrah and its twin city of Sodom predicting that both the cities will be destroyed too. Noah was later seen heading to Gomorrah's Zoo to 'look for passengers' for his ark. He was later found drunk and naked lying on a falled street sign that read 'Flood!' Empty cans of Irn-Bru were found close by.

Present at the Babel meeting in Gomorrah was the recently elected Patriarch of the Americans, Joe Biden, and a former Patriarch, Barack Obama. Not present was the Pharaoh of Egypt, who failed to make it to the conference due to a fatal pile-up of his army in the Red Sea, though others present said that excuse belonged to later era. The host of the meeting, Nebuchadnezzar from Great Babylon, was busy dealing with a Babylonian named Banksy who was scribbling cryptic messages on walls.