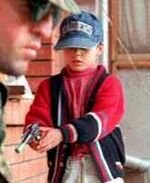 The beginings of a lifetime of crime.

South Sydney, NSW. - An eight-year-old girl who murderd her teddy bear using plastic scissors has prompted police to begin a crackdown on the younger criminals in society. In a statement released by police, they said that "more and more criminals are getting younger." After some confusion with the reporters from the Daily Telecraph (sic), involving the use of anti-aging creme, the statement was re-worded by police to say "More young people are turning to crime."

The police said that the problem had to be "slapped on the butt", as it would only get worse with time.

"Now they're killing plush toys and stealing tennis balls; tomorrow, they may be killing. . . dinosaurs and stealing football stadiums", said the police spokesperson.

In the past two months, seven separate armed robberies by two 12-year-olds were recorded, including one incident involving a gang of 3-year-olds taking control of an entire department store by walking into the 'price-check' microphones, knocking everybody inside the shop unconscious. Three counts of Grand Theft Auto, the theft of PC games from EB Games, and even a homicide, involving the lethal flicking of paper wasps with rubber bands, were recorded.

Police say that they need to get strict, and that all kids need "rules and boundaries." They also said that they were currently debating among themselves as to the use of physical force, and are threatening to divorce into two separate groups if they cannot reach an agreement.

The main reason for this change, say police, is because previous attempts to punish younger criminals were ineffective, and that they need to have some more discipline. Punishments such as sending the criminal to his cell to think about what he's done have failed dismally, as the criminals had toys to play with in their cells, which usually ended up in more murder cases. This is the reason the old punishments will be phased out over the coming months, to be replaced with a harsher, old-fashioned system, involving chains and cat-o-32-tails.