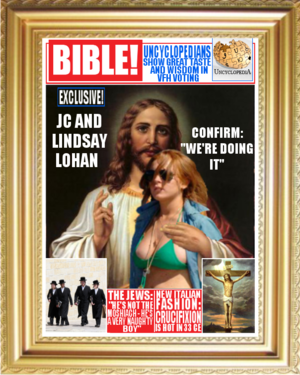 Evidence that Uncyclopedia is anti-Christian! What's the Internet equivalent of burning books?

THE INTERNET -- Proof has surfaced that wholesale media outlet UnNews, under the auspices of the Uncyclopedia Cabal, is dedicated to the eradication of Christianity, and indeed, even the inferior religions.

The picture pictured (right), a sad, mocking, smart-alecy attempt at satire and parody concocted by demon-possessed UnWriters, is the evidence being held up by the religious, right, left and middle.

"Just look at the way they insult our Lord and Saviour Jesus Christ," said one Jesuit history teacher, wrestling coach, and fondling enthusiast from the Northeastern United States. "It's the worst kind of blasphemy, really. They even go so far as to create multiple Jesii, each more foul and evil than the last. I'm telling you, these people should be hunted down and eliminated."

Buddhists UnNews staff contacted either didn't care, or were themselves readers or contributors to Uncyclopedia. Much the same held true for atheists and agnostics. Hindus didn't much seem to care either, since all the fuss was mostly about some crazy white people.

Not surprising was the fact that Jewish readers and contributors to Uncyclopedia are, to a man or woman, insane.