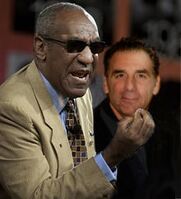 Cosby (72), who has long been an outspoken critic of poor black people and hip-hop culture, said in a written statement today that Michael Richards was completely justified in his recent on-stage racist tirade against some black hecklers, since so many black people think being rude and ignorant is socially acceptable.

"I don't blame him for going off on these stupid black people," said Cosby. "They obviously believe what they're told by the purveyors of so-called hip-hop culture that it's okay to mouth off like ignorant fools in public. They obviously weren't raised right."

The statement also went on to express Cosby's disappointment with the rest of the black comedy community, which has unanimously vilified Richards.

"That black comedians can go on stage and say 'nigger' every other word while not giving Michael Richards the same freedom to express himself is nothing but blatant hypocrisy."

Cosby said that he worked hard for decades so that the black community could make inroads that could lead to success within the predominant white culture, and is saddened that so many young and poor black people choose to embrace an alternative and confrontational black subculture that only limits their chances of gaining social power.

"It's sad that Michael Richards should be so overwhelmingly scorned for simply holding a mirror to the niggers in his audience."

Samuel L. Jackson could not be reached for comment. But he's pissed.