UnNews:Controversial racially charged series of Survivor claims yet another victim 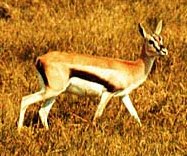 One of the contestents on the controversial new Survivor series.

MOMBASA, Kenya -- The new racially charged Survivor series has taken a tragic turn, with a member of the black team being shot and killed by a member of the white team while attempting to poach a gazelle, one of the challenges required to obtain immunity.

Survivor judges are reviewing the tape of the incident and trying to arrive at a consensus as to whether the black team should receive an automatic immunity as a result of the death.

Unlike previous Survivor editions, rather than by age and gender, the latest installment of the perennial reality TV show has divided the teams up by race.

The shooting is only the most recent controversial incident on the show, which has also included the invasion, colonization, and mass enslavement of a large part of Africa by the white team, as well as brutal tactics during the tribal counsel voting sessions, involving truly Machivellian mechanications, including tactical voting and cruel ethnic stereotyping.

This is not the first time Survivor has courted controversy. During the San Francisco edition of the show, several members of the Gay team were widely criticized for forgetting to call their mothers on their birthdays.