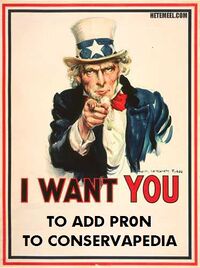 Can it be wrong when Uncle Sam tells you to?

PROVIDENCE, Rhode Island, Saturday (UnNews Dept. of Liberal Bias) -- A recent study conducted by Brown University revealed that conservative Uncyclopedia-parody website Conservapedia, while pretending to be "educational" and "clean", is in reality a breeding ground (does that count as a pun?) for pornographic content. The findings of this study can easily be reproduced by checking Conservapedia for the relevant rude words - now that's science! A lazy busy afternoon of field testing by our own team of researchers produced shocking findings. READER DISCRETION IS ADVISED.

Conservapedia already features articles on the following topics - often with highly perverse content: Sex, Breasts, Pubic Hair, Sodomy, Virgins, Titty Mags, MILFs, and even Santorum. Sometimes the sickos combine two topics to make an article that is even more perverse than dealing with one topic at a time (see example here). 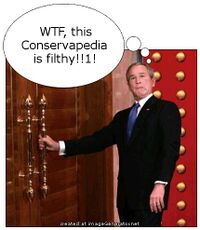 The study, however, has leading White House officials mildly concerned, as Conservapedia is George W. Bush's primary source of information. "God help us if Dubya gets hold of any of these articles," one presidential aide was quoted. "I fear he might go on the crack again."

When confronted with the results of the study, Conservapedia mastermind Andrew Schlafly, appearing at the door of his dungeon house in his pajamas at 2 PM, fell into a rant: "What conservatives wank to in the privacy of their own home is nobody's business," adding that "It's only filthy if Liberals do it."