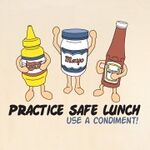 This poster will adorn Middle School lunch rooms across the US. Numbers of unwanted pregnancies are expected to plummet.

WASHINGTON DC US -- After intense lobbying by the condiments industry, Congress today passed the Safe Lunch bill into law. With teen pregnencies on the rise again, House and Senate Liberals united in a stand for prevention. The official slogan of the new program to prevent unwanted pregnancy with the use of condiments is, Practice Safe Lunch. Use a condiment! "Kids are going to eat lunch anyway, you can't stop them. They may as well be educated as to the ins and outs of eating, if you catch my meaning," said Rep. Harmon Killibrew of Puerto Rico.

Funding for this massive project is expected to surpass the four trillion dollar mark, making it twice the price of the Big Dig project in Boston. The bulk of this money will come from a tax on an increase in state tax stamps for Marijuana. "The idea of having rich, scurrilous hippies to fund such a worthy cause is a delicious irony," quipped DEA Agent Foster Brooks. "We get to bust and fine them for the dope and non-payment of taxes if the don't pay, and the stupid ones who actually buy the stamps are easy pickings for slow days at the office. It's all good." 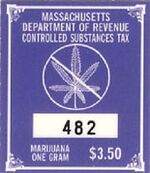 Controversial Safe Lunch Program will be funded by evil people who buy these.

Despite the fact that increased condiment use will add calories to lunches, backers of the bill are convinced it's in the interest of public health. Speaking to reporters by the White House outdoor water spigot, Republican Rep. Dan Bohemian of Idaho asked, "What would you rather have, a fat lazy kid or a pregnant kid? I think the answer speaks for itself."

When a letter to Congress from the National Science Foundation pointed out that it is not possible to get pregnant just from eating lunch, conservatives were outraged. "This is as bad as those commies who want to teach evolution as fact," said a red-faced, spitting Senator Roger Butt-Twitch of Kansas. "I'm sure I'm not alone in the Senate, in hating those damned skeptical science types. By God, Atheism ought to be outlawed."