UnNews:Cocaine is Good for the Soul 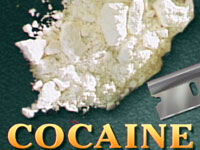 SOME SECRET LAB, United States - Cocaine is a highly addictive narcotic well-known for its amusing and pleasurable effects when absorbed through the nasal cavaties. Cocaine is classified as illegal, but is still used often around the United States. It is said to have certain chemicals that shorten lives considerably, and is one of the most dangerous drugs. But scientists don't believe that cocaine is so bad for you. In fact, they believe it is good for your soul.

These scientists conducted a series of tests seeing if any drugs are actually good for you. The first three used were crystal meth, crack, and cocaine. Three people were given samples of crystak meth, three were given crack, and three were given cocaine. These people were carefully monitored in their regular lives. When addicted to crystal meth, their life became a total mess, and they also became very depressed and had to take anti-depressants, which made their life even worse. When given crack, they immediately had over-doses and were hospitalized. When given cocaine, however, they became joyful and happy people, acting as though they were your joly old Grandma. This test was enough to convince the Congress to make Cocaine perfectly legal.

Other drugs tested were marijuana, dope, speed, nuke, and kittens. All of the tests had negative effects, so cocaine was tested again to make sure, and once again, made the test subjects lives great and happy.

"Quite an odd phenomena really," says that scientist guy. "Cocaine improved the lives of the tested humans instead of destroy their lives like all of the other drugs. We can't explain this but, things happen they way they do so..."

Now cocaine is back in its prime, and where it is legal the demand is up, and dealers are making huge profits. Not to mention now that their activities are no longer illegal.

So was this decision to make cocaine legal again a good one, or will the US regret their actions forever? Why don't you go out and get some coke and find out?