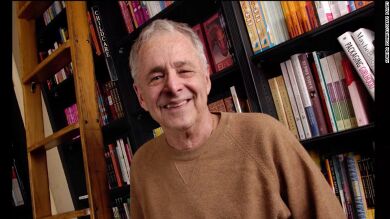 Barris had so many books that he needed a ladder. But no more, as he presumably has wings now.

PALISADES, New Jersey -- Charles Hearst "Chuck" Barris has passed on at the age of 87.

The creator of The Dating Game and The Newlywed Game suffered from failing eyesight and surely mistook last Saturday's obituary of Chuck Berry for his own, a prophecy that self-fulfilled almost immediately. Berry, by comparison, was the rock-and-roll pioneer who rode a standard eight-bar blues format with tiny differences onto the Top Forty about 6 dozen times.

Berry's only television hit was The Jailbait Game, as his singing career was repeatedly interrupted by The Prison Game owing to the Mann Act, which makes it a felony to transport under-age girls across state lines for the purpose of debauchery, a law that New York Governor Eliot Spitzer enforced with zeal until the tables were turned and the law found him hiding beneath, with dark socks on. Berry made it to the age of 90, and made it partway through last Saturday.

Barris was not arrested for anything (that we know of) and had no songs in the Top Forty, though Palisades Park hit Number 3 when covered in 1962 by Freddy Cannon. Fittingly, the "King of Schlock" chose Palisades at which to die; either that, or death chose it for him. As far as debauchery goes, media reports say he is survived by a "wife of 16 years."