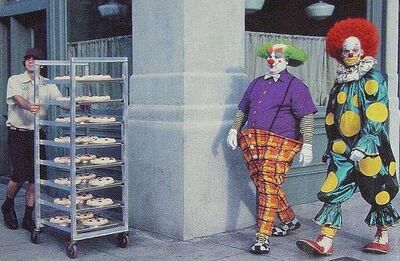 Right Wing Christians and Mormons on a collision course.

VILNIUS, Lithuania -- Rabble-rousing Zap Rowsdower pushed the limits of civility once again at an emergency meeting of Seimas of the Lithuanian Republic, ranting about Mormons and fundamentalist Christians in the United States was behind the sharp rise in black market sleeping pills sales. Heady buck-skinned Rosicrucians saying the Rosary backwards, listening to Deep Purple on their cute little lavender iPods, giggled like schoolgirls as they lined up at the blasphematory.

Rustic girders broke through the morning's fog as a purpled sun tried to sneak through the more higher cloudage. "Peachy", thought Rowsdower. An evening full of spell checking awaited him back at the Duck bungalow. He mentally calculated whether this was a day he was allowed to drink alcohol. Chagrinless, he cackled croppily all the way to the tavern. I think it was called "Steve's".

Do you have to be fat to be able to belly up to a bar? Rowsdower had more important business on his mind. "Thump wiggy embers", he mused, raising his left hand in a complicated sign indicating he would like a cinnamon beer and a shot of tequila. In 3 dozen minutes he was 3 sheets to the wind, and tacking erratically.