UnNews:China poisons everybody else in 2008 Olympics, still isn't caught 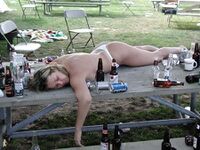 An unidentified high calibre athlete succums to the stress of having to perform for her country.

BEIJING, China "It seems that the United States Athletes not only remain in second place in the medal count, but now they can't stop throwing up nor stop speaking in slurred tones. UnNews reporters tried to investigate but the Team U.S.A. just threw up on the UnNews mic. One of our other reporters too tried drinking beverages in the Olympic Village and now he also seems disoriented. Because UnNews doesn't have a 'Total Access VIP Card' (our 'E3 VIP Card' doesn't work everywhere here), UnNews was unable to gain access and hence, not report the situation to the Olympic Events Committee. However, Chinese Authorities have been notified and have communicated to the UnNews staff that they'll "look into the matter". It just seems we have to bet on China for now. Bob?"

"Thank you Badoonga, and congratulations again on your Bronze Medal from the 2004 Olympics as part of the Kenyan Downhill Aerobics Snowskiing Team."

Under all those trophies and medals lies one of the finest athletes in the world.

"No problem Bob, just proud to be on the UnNews Staff. I'll be here next week to report on the USA's Whack-a-Mole Team's quest for Gold-and that's on Tuesday night. Good night."

"That's Badoonga Hagoody, live from Beijing. To recap; Badoonga reported that Olympic Athletes have been seen staggering around, crying, crawling, vomiting in the streets of the Olympic Village, and admitting themselves into Beijing Memorial Medical Center. The most recent reports lead to a type of beverage poisoning, however authorities have not been able to pinpoint the actual root cause of the illness-an illness which seems to be spreading as the Olympics draw to a close. We certainly hope the situation doesn't worsen for America's Athletes, and we look forward to a swift solution to this bizarre situaion. Folks, on behalf of UnNews, this is Bob DeCuesta saying, Good Night World."