UnNews:Children with high IQs most likely to become veggie spods 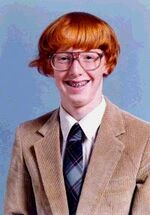 UNNEWS MEDICAL -- A new study suggests that as a child's IQ rises, his taste for meat in adulthood declines, and his desire to become an annoying, self-righteous, pain-in-the-ass spod vegetarian increases.

British researchers have found that children's IQ predicts their likelihood of becoming annoying vegetarians as young adults -- and in the process, lowering their risk for both cardiovascular disease and getting laid.

"Brighter people tend to be socially isolated, reducing their exposure to many ordinary diseases," concluded lead author Catharine Gale, a senior research fellow at the MRC Epidemiology Resource Centre of the University of Southampton and Southampton General Hospital.

Recent studies suggest that vegetarianism may be associated with lower social contacts, leading to reduced risk of obesity from going out and enjoying oneself, and heart disease, which is the natural result of doing anything fun with the opposite sex.

The report is published in the Dec. 15 online edition of the British Medical Journal.

"We know from other studies that brighter children tend to be annoying little goody-goody pricks -- they're less likely to smoke, less likely to be overweight, less likely to have high blood pressure and more likely to take strenuous exercise," Gale said. "This study provides further evidence that people with a higher IQ tend to live healthier, albeit less enjoyable lives."

In the study, Gale's team collected data on nearly 8,200 men and women aged 30, whose IQ had been tested when they were 10 years of age.

"Children who scored higher on IQ tests at age 10 were more likely than those who got lower scores to report that they were vegetarian at the age of 30," Gale said. "Lot of little snotty losers, is what they are."