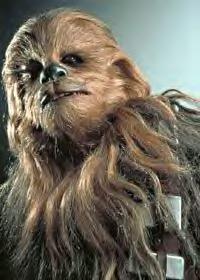 HOLLYWOOD, CA - Chewbacca, Han Solo’s beloved pet Wookie, was arrested recently after butting his head against a Japanese tourist in front of the world-famous Grauman's Chinese Theater in Hollywood, California.

Allegedly, the tourist had sexually assaulted the huge extraterrestrial. "Nobody tells this Wookie what to do," Solo's pet cried before butting his head against the tourist who, according to the Wookie, made a sexually suggestive comment and invited Chewbacca to have sex with him.

"Everybody who's ever seen Star Wars knows I'm straight," Chewbacca (or "Chewy", as his friends call him) declared. "I mean, didn't I try to bone Princess Leia?"

If viewers don't recall seeing such a scene in the movie, it's because George Lucas cut it, Carrie Fisher, who played the princess, said. "Chewy did try to have sex with me - he humped my leg - which is why I think it's ironic that somebody's putting the moves on him. Now he knows what it's like to be sexually harassed."

According to witnesses to the assault, Elmo, Pacman, and various cartoon characters, including Superman, stood idly by, perhaps out of respect for their fellow fictional character.

Police released Chewy into the custody of his owner, Solo (i.e. actor Harrison Ford), whose wife, Calista Flockhart, plans to use him as a carpet for the couple's palatial home. "That ought to keep him out of trouble," she told Unnews reporter Lotta Lies.