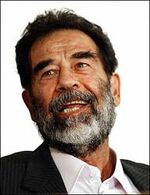 BAGHDAD, Iraq -- The celebrated cannibal chef Saddam Hussein, in an effort to promote his new restaurant chain "Crazy Uncle Saddam's", offered passersby a glimpse into his culinary techniques today in Baghdad. Though his screams seemed incomprehensible at first, UnNews reporters managed to decipher a few examples of Hussein's specialties.

On Head Cheese Soup: "We will crush your heads! And then we'll pour your brains over a fine cheese fondue! And sprinkle little bread crumbs over it, yes!"

On Kneecap Oysters: "We will shatter your kneecaps! And surgically remove them! And feed them to oysters! Who will then maybe make pearls! Or if not, we will sell them to people to eat!"

On Blood-Red Wine: "We will squeeze the blood from your neck, and pour it into a funnel! Then we'll add grapes, and stomp on it for a while! Then we'll wait several months, you know, to forget you existed. Then, we shall stir up your remains and put them in bottles!"

On Charred Flesh, With Butter: "We will rip off your skin and throw it in a pile! Then we will burn it! Then, when we're tired of burning it, we'll burn it some more! And then hang it up to dry. And coat it with butter."

On Eyeball Soufflé: "We'll rip your eyes right from their sockets! Then we'll beat them until they reach soft peaks! Then we will add molten chocolate! And will put them in the oven (which we will preheat) and bake them for a short amount of time! Meanwhile, laughing triumphantly in anticipation!"

Passersby seemed unimpressed, perhaps a sign of the near-monopoly that rival Hannibal Lecter has on the market. However, sources tell UnNews that Hussein does have a cult following, so perhaps he is not quite out of business yet.