UnNews:Canadians speechless as November is the new winter 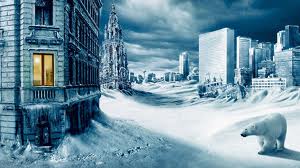 An initial theory that that the cold spell originated at a factory producing the Polar Bear Ice Packs™, where a worker inadvertently left a door open, was quickly quashed as the harsh weather continued long after the door was closed.

The news, which literally hit reporters in the face as soon as they left their houses, reached the front page of various newspapers. "Global warming must be a hoax!" titled the Globe and Mail. As the more simplistic Toronto Sun put it, "Global warming trolololol!"

Across the border, six feet of global warming fell on Buffalo, New York in two days, and the NFL made plans to move the weekend's football game to somewhere more pleasant, such as Detroit.

A reporter wearing a NASA spacesuit designed to resist even the moon's climate took to the streets and interviewed the few citizens who dared stop for a chat. "I only have one kilometer to cover by foot to get to work, and the heated maple syrup my wife covered me with is already starting to freeze and crack," said a tall Lord Christopher Monckton, visiting the city for a conference on changing "global warming" to a more persuasive phrase. However, he hurried off without elaborating.

"Mphmgm gragnl nommmsaphumpff" was the only comment from the next man-on-the-street, who seemed to have a severe case of frozenjawitis. Another citizen resting on a public bench had no comment at all, but this was merely because he was frozen solid.

This reporter invited global-warming spokesman Al Gore to experience for himself the climate in Canada. Mr. Gore swiftly declined and said he would rather continue to document the dramatic heat rise in Florida, where the temperature "soared to an alarming 26 Celsius recently," he confided. "Something must be done, this heat is awful, especially on my private beach. The world is running out of parasols!"