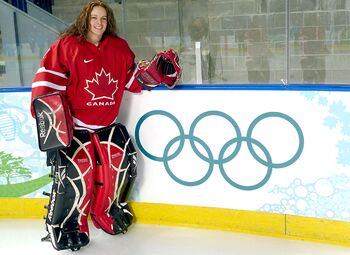 Canadian goaltender Shannon Szabados does a terrific job of looking pretty, which is all she really has to do.

VANCOUVER, British Columbia - Make no mistake, it gets lonely back there in goal for Women's Team Canada goaltender Shannon Szabados. While her teammates are in the offensive zone for the entire game, skating around, scoring goals and having a blast, poor Shannon has to sit back there, away from all the action, just sort of hanging around.

So to pass the time, she has implemented some interesting strategies. "I got my taxes done during the first period of the Slovakia game" she said about the game that Team Canada won 18-0. "And Canadian taxes can be complicated. Let's see. I've taken up knitting, which the girls make fun of me for, but it really is a great, holistic, mental, emotional and creative occupation. And then, for one period during the Switzerland game, I actually just snuck a dummy made of pillows and straw into the goal crease and took off. I recorded some shouts of encouragement and stuffed a speaker in the helmet. No one noticed. I got all of my laundry done."

Szabados, a lovely young woman with long flowing locks, also makes sure she always has a fresh collection of haircare magazines on top of the goal before the period begins. "It takes some doing to care for a mane like mine," she quipped.

Every now and then she can be seen pretending to defend the goal from oncoming attackers, just because it makes her feel like a part of the team. "It's embarrassing of course, but I can't help it. I don't really think there are invisible hockey players coming at me, just so you all know. Sometimes I just like to make believe."

Although Switzerland did score one goal against Szabados in Canada's 10-1 rout against them, analysis of the goal clearly shows that she let the puck through purposefully, feeling sorry for the Swiss girls after her teammates had been beating them silly for forty-plus minutes. "I don't know. Half of me wanted to get into the spirit of the game and actually make a play. But I was reading a great article on some new perming options that I wanted to get back to anyway, so I just said, what the hey. Let the poor gals have one."