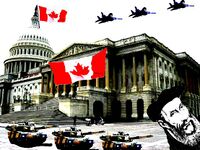 If Nostradamus is to be belived, this is the future

CANADA -- Two American citizens were today shot and killed in a botched deportation by the Canadian Marines. The two men had been masquerading as a Canadian TV duo for years, sources say, but were secretly hiding a false identity and were undercover with the C.I.A. In spite of their popularity, they continued to spy on the Canadians for the US government. The men, a Mr Stoot and Mr Argyle, were arrested by police yesterday afternoon. They were found guilty of treason and sentenced to be shot at dawn. However, after negotiations they were instead to be handed over to the American Army.

However, in a tragic turn of events, they would be shot at dawn anyway. At 9.00am this morning, a U.S airforce Sea Knight Helicopter touched down in the heart of the Candian Amazon The prisoners were led out by marines and handed over. But just before the spies got on board, the Canadians opened fire, killing the two men and sending the pilot off in a panic attack, causing him to fly blindly through the jungle, making 29 different species of Fig extinct in the process.

The attack happened, apparentley between confusion between the two groups. The Canadians had no idea what the Americans were saying, and vice versa. Captain F.Gump of the US marines said "It were all like 'eh's' and 'aboot's' they were sayin, didn' make no sense!." "Typical" said a General of the Canadian Army. "They always use the aboot excuse"

In a press conference today, President George Bush made a speech.

"Today, December 28th, 2006 - a date which will live in infamy - the United States of America was suddenly and deliberately attacked by ground forces of Canada. The United States was at peace with that nation, and, at the solicitation of Canada, was still in conversation with its Government and its ruler, looking toward the maintenance of peace in the area.I ask that the Congress declare that since the unprovoked and dastardly attack by Canada today, December 28th, 2006, a state of war has existed between the United States and Canada. And I'm very sorry about the figs."

However, most people are now used to the annual war, which these days happens every three months or so. The annual war carnival will take place tomorrow. However, one man, Nostradamus, predicted that this would lead to a surprise penalty shootout victory by Canada, leading to complete takeover of the known Universe. Only time will tell. Canadian Socialist hippy, Jack Layton has demanded for Prime Minister Stephen Harper to remove all forms of weapons from the Canadian Military immediately so that Canada will avoid future conflicts of the nature. Harper responded to Layton with "You is a frog eaten' surrenderin' monkey, go back to Kazakhstan."