UnNews:Cameron tells Britain, "I am the walrus" 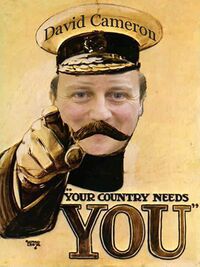 Join the British Volunteer Army and dig a trench in my back garden.

BIRMINGHAM, United Kingdom -- British Prime Minister David Cameron tried to cheer up the Conservative Party with the memory of long-dead British general Herbert Kitchener. In a speech that could have filled a Zeppelin, Cameron recalled the First World War to encourage his party to follow his coalition government with a policy of major cuts in public spending.

Dressed for the occasion in a miltary uniform that resembled something off the cover of Sergeant Pepper's Lonely Hearts Club Band, and waxing his moustache as he got to the blue Conservative meat of his speech, David Cameron reminded everyone who the real enemies of Britain were:

When I formed the Coalition government with Corporal Clegg, I said 'we must seek to blame someone for this bloody crisis.' Checking first with my bank balance, I have decided that we all need a bit of fiscal restraint in the next four years. It's going to be bloody and we will be going over the top a lot to fight the true enemies of Britain. I am talking not just about the Germans and French but those traitors in the Labour party, the Trade Unions, public sector workers, the work-shy, the people we just simply don't think are up to it. That's why I am going to increase the levels of unemployment so we increase the size of our armed forces to go head-to-head with the Hun abroad and the Hun at home. We did it in 1914 and in 1939. Now let us take this spirit into 2010 and declare war on scroungers!

Reminding the Conservatives about their first party leader, Queen Boadicea who fought the Roman Empire in the first century, Cameron said that the Conservative party would encourage everyone to give up a few days a week from going to the golf club or drinking just one bottle of champagne in the City of London and organise Social Cleansing Squads to force out poor people to increase the value of their properties.

I need all of you here to do this for Britain, as we can't afford to do it ourselves. But, like General Kitchener in the First World War, I expect millions to sign up for this new war. This time let's start the battle here and then extend out a bit more, if everything goes well.

After finishing his speech, Cameron kissed his wife Samantha Cameron and confirmed that they were going to book a cruise to Russia to see how the former Communist state deals with dissent.