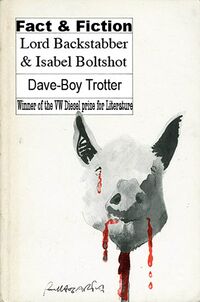 LONDON, United Kingdom -- British Prime Minister David Cameron has ordered a 'search-and-reputation-destroy' mission to seek out the Conservative Party M.P. claiming to have photographic evidence to back lurid stories that a young Mr Cameron put an unspecified part of his anatomy into a roast pig where the apple properly belongs.

This follows the publication of a book by former Tory party donor Lord Backstabber, in which he claims Cameron offered him the job of 'Senior Bog Cleaner' in 2010, instead of Business Secretary (Belize Holdings Inc). Enraged, the former Michael 'Mike' Ashcroft elected to work for the next five years promoting the charms and calculated buffoonery of Boris Johnson, but Cameron's unexpected victory in the May 2015 general election spoiled this plan. Now Cameron wants Britain's intelligence services to track down who was behind the 'Toff's Dick in a Pig's Head' story that caused worldwide laughter from other countries' leaders.

Speaking for the first time about the rumours, Cameron gave a description of the man he thinks has been sullying his reputation.

"I have asked MI5 to look for a blond-haired man on a bicycle with a fake Churchillian accent. I am pretty sure he knows who is behind this story. I don't want to sound pathetic and whiney but this 'little prick' has a lot to answer for and has made me and my family cry."

Mr Cameron's allies in Parliament insist that, if Oxford underclassmen had gotten Mr Cameron to do the deed on a dare, it is unthinkable that any of them would have photographed it.

The police said they will not take part in the hunt to 'stay impartial'. Their Porcine Unit are currently investigating a story involving a wolf and three pigs for their involvement in a housing scam.