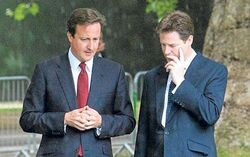 Clegg and Cameron up a tree....

LONDON, United Kingdom -- A new day in British politics has dawned--ironically, in the middle of the night--as a Conservative-Liberal Democrat coalition government moved from being not a fact to in fact being an actual fact. The deal between the Liberals and Conservatives was finally brokered when Cameron made a commitment to let Clegg 'enjoy himself' by driving the Liberal leader home from impromptu nights out on the sauce. "David has a fair sized people-carrier and is very gentle around corners," a spokesmen said.

Former Liberal leader Paddy the Ashdown gave context to the context: "Cameron's initial reluctance to return a lawnmower he borrowed from Clegg in February did threaten to scupper the deal; but in the end he was able to emphasise the size of his garden." These words came only days after Ashdown had criticised the Conservative leader for being a cunt.

Accusations that the Conservatives have got a raw deal from this coalition were denied outright by a more hairy than remembered Michael Heseltine, "You don't need to drink to enjoy yourself" he said--before conceding that it does make you more attractive to women.