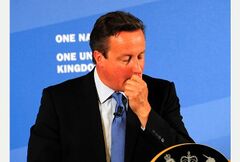 Cameron attempts to hold back the laughter as he imagines Yorkshire.

LEEDS, England -- Just before delivering a speech, Prime Minister David Cameron revealed, in the privacy of the microphone attached to his collar, "We just thought people in Yorkshire hated everyone else, we didn't realise they hated each other so much." This was broadcast to the audience, causing a stir amongst PC fanatics on PCs who pointed out the offensive nature of this comment all over the internet.

Cameron later appeared on the BBC's Test Match Special to talk about the cricket with his Eton pal presenters. During this discussion he apologised for his comments, which he hadn't intended the county of coal-mining inbreds to hear. "I was picked up as saying something that was not meant to be broadcast but it was and I would like to make it clear now that Yorkshire's a joke. They all smell weird, none of them are rich enough to escape the side-effects of my social and economic policies and I don't actually believe the county exists." To further back up his point, Mr. Cameron found a Wikipedia page right at the bottom of the barrel, which showed that the county of Yorkshire did not in fact exist, as it was split in to four official counties some years ago.

The Official Opposition were quick to point out to Cameron that Yorkshire is a real place but Cameron retorted by saying that knowing the Labour Party's research department, he wouldn't trust them on finding facts in a science textbook. "Clearly Yorkshire is just a made up word created from Lord of the Rings fan fiction by combining the home of Frodo with the evil race who inhabit Middle Earth and then sticking a "Y" on the front," he further commented, "Otherwise we would be implying that an entire county existed who actually opposed Thatcher's brilliant economic policies, and I'm sure that couldn't have been the case."