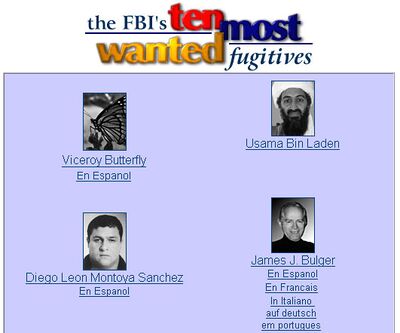 The butterfly is now at the top of the FBI's most wanted list.

The house-senate investigative committee that slammed the Bush administration for its actions in the Hurricane Katrina aftermath last Thursday has also found out what was actually responsible for the horendous disaster in the first place. The 520-page report names a butterfly as the instigator of the Hurricane.

Said Rep. Thomas M. Davis III (R-Va.), who presented the report: "It is of course very important to look objectively at how this administration has dealt with the crisis and the mistakes that were made, but we must not forget that the administration was not responsible for the disaster. The blame for heinous act can only be placed at the butterfly that took the lives of so many American citizens."

The report states that around 4 PM August 21 2005 a butterfly in a small park in Tokyo, perhaps frightened by something, flapped its wings and started a chain of causality that eventually lead to the Hurricane Katrina that hit New Orleans on August 26. Rep. Davis: "We used several powerful supercomputers to run simulations based on popular oversimplified explanations of Chaos Theory. We finally traced it all back to the butterfly.

The flappage of this butterly's wings caused the deaths of many, many innocent Americans, reiterating once again that we are at war.

It was determined to be of the species archippus, genus limenitis, commonly known as a Viceroy butterfly. The suspect is, at the moment, at large, but we have no doubt that it will be caught and brought to justice very soon."

The president responded quickly in a press conference. "Mistakes were made by this administration. I cannot deny that. However, this is not the time to be quibbling about how responded how to what crisis. The butterfly responsible for this hideous and evil deed, is still out there, possibly planning future acts of terrorism. We cannot, and will not rest before judgment is brought to those who oppose freedom. The flappage of this butterly's wings caused the deaths of many, many innocent Americans, reiterating once again that we are at war. America, indeed the free world, is still at war with terror."

When asked what would be done to prevent further attacks, the president responded: "It has been explained to me that this attack was performed with the use of chaos theory, which is a mathematical theory dealing with the behavior of certain nonlinear dynamic systems. I am planning to introduce legislation that will closely monitor anybody involved in nonlinear dynamic activity, and will limit the allowed use of chaotic systems such as global airflow and weather patterns, but also more local systems like Lorenz attractors, Double pendulums and Rössler Maps."

In an official FBI press release, director Robert Mueller stated: "The FBI will do everything in its power to find the butterfly and bring it to justice. We ask that anybody who recognizes this butterfly or has any other information pertaining to the whereabouts of the suspect contact us immediately."

With this new extensive evidence, all accusations of God's responsibility for Hurricane Katrina, based on his September 6 confession, have been dropped. UnNews will stay in touch of the Katrina controversy as the investigation continues.