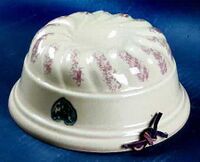 CRAWFORD, Texas -- According to something, anti-war protester Cindy Sheehan recently purchased property near Bush's ranch in Crawford, Texas using insurance money she got from her son after he was killed in action in Iraq. Sheehan made headlines by protesting the "police action" in Iraq by delaying shipments of Beano to the Bush Estate in Texas during the Presidential Chili Cookoff, resulting in a conflagration of brain damage to attendant Republicans. Ironically, no one noticed, however that they'd become more addle-pated..

Bush and others welcomed Sheehan to the neighborhood by presenting her Jello-O molds. The Jello-O molds, which are traditionally given to new neighbors in the United States, were eaten later that night.

The President reportedly snuck out past his bedtime to put the mold on Sheehan's doorstep. "I intended for the mold to be the shape of a Democrat zombie, so I just made a mold of her face," said Bush in an interview, "I ate half of it though before I left it on her doorstep, so it kind of looked like Quentin Tarantino".

Bill O'Reilly also left a Jello-O mold, despite the fact that he doesn't even live in Texas. Bill recently bragged about spiking it with anthrax.