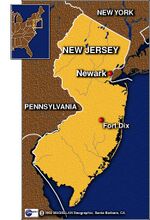 Washington, DC - President George W. Bush held an unexpected press conference at the White House on Wednesday in order to discuss the deteriorating gay marriage situation in New Jersey. With only two weeks left before the mid-term Congressional elections, the continuing gayness in Jersey has been weighing heavily on voters' minds. Despite continuing optimism from the Republican administration, the mid-Atlantic state has been slipping into flamboyant gayness.

Speaking to reporters on the White House south lawn, Bush promised to shift strategery in the ongoing War on Gayness, but vowed that conservative forces would not "cut & run" from the disputed territory. Critics say the administration has been unable to effectively deal with the situation in that state, as well as the other two that had been labeled in 2001 by Bush as the "axis of evil" - Massachusetts and Vermont. Vermont's attempts to allow gay marriage go back to 1999. Also, in defiance of international condemnation, Massachusetts had just test-married a gay couple recently.

Meanwhile, the New Jersey situation really spiraled out of control this week when the state's highest court approved civil unions and declared that gay couples should be afforded the same rights and privileges as heterosexual ones. "They're just one step away from allowing gay weddings," grimly reported United Nations Chief Marriage Inspector Hans Blix. The state removed monitoring equipment from its churches years ago. "Who knows what kind of ceremonies are really going on in there," added Blix.

The situation on the ground remains grim, according to analysts. Recent casualty reports suggest that as many as two troops a day are being turned gay in New Jersey by the relentless attacks of Al-Gayda. Although the media has tended to focus on those who have been lost to gayness, a high cost is also paid by those who are fortunate enough to escape with their sexuality intact, but who have become metrosexual. The metrosexuals face expensive heterobilitation therapy (involving a years-long regimen of Clint Eastwood movies, country music, and monster truck rallies). Those beyond the reach of heterobilitation therapy must pay for a lifetime of expensive clothes, designer colognes and stylish haircuts.

But Republicans are adamant that the situation can still be brought under control, with Bush expressing confidence in Governor Jon Corzine. He refused to say whether more conservative activists will need to be brought in, deferring instead to Rush Limbaugh, his main talk show host on the ground. But even some loyal Republicans now concede that more manpower may be needed to stem the flood of gayness, particularly in the capital Trenton. A political solution to the crisis is unlikely, with amendments to the constitution unable to get off the ground among partisan bickering.

Some analysts are suggesting that New Jersey may have to be split up into three separate states in order to avoid conflict - much like Virginia was split up into east and west along pro and anti-hillbilly lines. The proposed border would divide the region into North and South Jersey, with the already semi-autonomous Atlantic City area becoming the third state. But critics of the plan say this would cut off the southern gays from the oil revenues of the north's refineries, leading to more conflicts.