UnNews:Bush disappointed South America no longer on brink of war 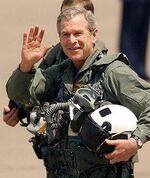 President Bush was all suited up and ready to declare "mission accomplished" in South America before a war had even begun.

WASHINGTON, DC -- President Bush expressed disappointment on Friday after learning that South American leaders resolved their differences and averted what could have been an armed conflict on the continent. Tensions rose recently as Colombia conducted cross-border anti-rebel raids into Ecuador, which sparked Venezuela's Hugo Chavez to have a hissy-fit and send troops to the border.

As the contentious rhetoric increased over the last week, U.S. President Bush indicated he hoped a new war would begin. He immediately expressed support for Colombia in the possible conflict, and not just because Venezuela is lead by his arch-rival socialist Chavez. The President explained that "back in the day when I still did cocaine, it all came from Colombia, so I am still very grateful to the people and government of that country, and I stand behind them 100%."

When Chavez ordered a handful of battalions to the Venezuelan border earlier this week, Bush was so excited he literally danced in front of the White House while waiting for Republican nominee John McCain to arrive. The prospect of disrupting oil supplies from Venezuela sent both oil prices and his and Cheney's stock prices way up.

Unfortunately for Bush, the South American leaders managed to hammer out their arguments with a peaceful agreement. "This is what happened when you employ diplomacy," Bush warned sternly, "you put our troops out of work! We must retaliate against those communist bastards." Ecuadorian Rafael Correa, Colombia's Alvaro Uribe, and dear leader Chavez all agreed that their energy is better spent railing against the U.S. instead of against each other.

One bright note for Bush's legacy of terror was a steep increase in unemployment during the last fiscal quarter. The economy was the last remaining aspect of his leadership that until recently hasn't been a complete disaster, and this latest report proved that the country is well on its way to a recession. "My reputation as an evil warmongering tyrant will be unsurpassed, except perhaps by vice president Cheney," Bush asserted.