Bush, with some of the Surge

WASHINGTON DC -- Amidst the never-ending Iraq debate, one thing everyone at last seems to have agreed on is that there are problems in Iraq, though what exactly the problems are is still being argued about (and in Florida, there are even some few enthusiastic souls who are still waiting for a recount). After years of silence on this question, today the Bush Administration has at last broken down and defined exactly what one of those problems are.

"Our troops are in trouble. And the trouble they are having has everything to do with oil energy" said a White House spokesman, "President Bush's new plan to send Surge to all the troops will exponentially increase their caffeine and sugar levels, thereby eliminating the need for coffee and enabling them to go around doing their jobs - shooting people and blowing stuff up - with much more vigor and enthusiasm!" 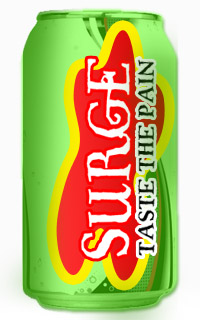 One can, and you're hooked. Or something similar.

Other voices, democratic, but also liberal, call for shipping of 20 000 surge protectors to Iraq instead. "Surge protectors will be essential to prevent computer meltdown over there and allow to install a functioning cyborg goverment. Arny already volunteered to go over for a couple of days as advisor" disclosed an unnamed whitehouse spokesperson.

Leading Democrats had already loudly voiced their opposition to this new plan several billion years before the plan was announced, way back in Prehistoric Times when they discovered that America's boys and girls, both in and out of uniform, were already consuming way too much sugar and caffeine. Also, the cost of this venture (after all, Democrats have never been able to abide the waste of taxpayer dollars!) has raised some concerns.

"They quit making that stuff for a reason" said one falling-far-behind-Hillary-but-still optimistic Democratic Presidential hopeful, "it failed before and it will fail again."