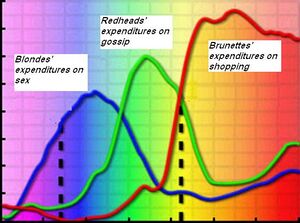 Shocking study shows brunettes have more fun than either blondes or redheads!

Baltimore, MD - Until recently, Americans long believed that blondes have more fun than brunettes and redheads combined, but a recent study conducted by researchers at the world-renown Johns Hopkins University Hospital in Baltimore, MD has disproved this long-held belief.

It was difficult, says Dr. Johns Hopkins, to identify the parameters of the study, including the definitions of some of the key terms associated with the research. “For example,” he said, offering an example, “what is ‘fun’? One person’s idea as to what constitutes fun is apt to differ from another person’s, just as the understanding of this concept is likely to differ among blondes, brunettes, and redheads and, for that matter, males and females.”

Since the study concerns women, rather than men, males’ concepts of fun were dismissed as researchers surveyed 1,000 blonde women, 1,000 brunette women, and 1,000 redheaded women. The results were tabulated, and the scientists concluded that fun, for women in general, regardless of hair color and intelligence quotient, consists of three types of activities, ranked in order from “most fun” to “least fun” as follows:

With these parameters set and the term “fun” defined accordingly, the researchers gave 10 blondes, 10 brunettes, and 10 redheads $10,000 each of hard-earned taxpayers’ money that the federal government had previously confiscated from them upon the threat of fines and/or imprisonment for failure to comply with the Infernal Revenue Service’s (IRS's) shakedowns.

The women spent varying amounts of the cash on shopping, gossiping, and having sex, with brunettes spending more of their money on shopping, redheads on gossiping (as measured by the dollars they spent on various tabloids and celebrity magazines), and blondes on so-called marital aids, or sex toys, especially how-to manuals.

At the American Psychological Association’s Annual Convention on Annoying Human Behavior, the researchers presented their findings in the form of a chart that shows the three groups’ relative spending on the three areas of interest.