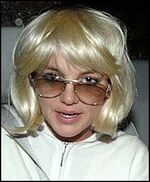 Britney mistakenly thought that wearing a wig would put her on the front pages.

LOS ANGELES, CA -- Former pop star Britney Spears is doing everything in her power to grab the media spotlight away from the Anna Nicole Smith, whose burial and paternity trials are keeping the nation (Nancy Grace) riveted. The 25 year-old media whore is upset that tabloids and reporters are no longer as interested in her after the separation from Kevin Federline.

Seeing Federline star in a Superbowl ad really pushed her over the edge according to sources close to the diva. Hanging out with Paris Hilton and showing off her crotch got a little attention, but ever since Anna Nicole died the major networks have been focused solely on the dead model. An exasperated Britney commented, "I thought going to rehab would do the trick, but most people didn't even notice." It took shaving off her hair and going completely bald to finally make the headlines.

However, within just two days the media focused back on Anna Nicole. "Britney was furious," revealed an aide, "she just couldn't understand how a dead woman could get more attention than she did." Fabricating stories about lice in her hair and bitter feuds with her mother improved Britney's media standing only slightly. On Wednesday, she decided to enter rehab once more to see how that would play with the crowds. But staff at the clinic said that when she turned a TV on to CNN and saw that it was still squarely focused on proceedings from an Anna Nicole hearing, Britney stormed out of the facility.

The singer reportedly showed up at a nearby gay bar, where after a few drinks she began yelling, "What do I have to do to get some paparazzi around here? Am I gonna have to wear a diaper and drive 900 miles cross-country like that crazy astronaut lady? Cause I'll do it if I have to! I will!" The belligerent Spears was taken home via a car service. She also expressed hopes that other men would come forward claiming to be the father of her young baby, which would surely garner media attention. But even random guys she slept with when cheating on Kevin admit that they would feel "ashamed" to have anything to do with the fallen star. One quipped, "Anna Nicole's dead body may be decomposing, but it still looks better than Britney."