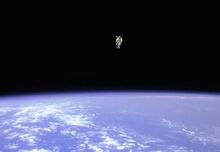 Yes I suppose that's the beauty of space, one can really observe one's empire better from up here.

INTERNATIONAL SPACE STATION -- Britain's first astronaut in space - not including independently sponsored British astronauts or British astronauts who have dual-nationality in order to be on NASA's programme - has been told he will play a major part in the upcoming spacewalk.

Originally told that he would take no part in the spacewalk, astronaut Tim Peake and the entirety of the British nation's taxpayers cried out in despair. However, after careful consideration, it was determined that Tim would get the most important job of all on the spacewalk, the so-called "staying inside the ISS" job. There, he is to help those on the outside conduct their spacewalk by banging on the glass porthole when they float past and pointing at various parts of the ISS to fix. He will then make tea for when the other astronauts come back inside the space station. Importantly, when his mates finish the repair and knock to be let back in, Tim will verify that they are not some random prowler or burglar and throw back the dead-bolt.

"I suppose in a way I have to play the role of the house-owner when the builders arrive to do the extension," said an eager and delighted Tim. "To be honest, walking around the inside of the ISS is still technically spacewalking - isn't it?"

Tim is part of the European Space Agency's astronaut programme and is funded by the British government. Prime Minister David Cameron said this made him "proud to be English" whilst British Labour Party leader Jeremy Corbyn has hailed this as "a brilliant example of nationalised space construction work" and wants to see more of it in the future.

"People I meet up here in the street often tell me that because I'm a mere inexperienced British astronaut that NASA don't want to put me in danger with a spacewalk. People seem to forget, I have much worse to fear. I live in constant fear of being stranded in space forever, with a government budget statement or an EU referendum outcome," Tim said.

So far in Tim's space mission, which began a week ago, he has begun conducting various experiments in space, like determining whether the Sun sets on the remains of the British Empire, ascertaining whether the Martians pronounce it "scone" or "scone" and mapping the spread of the spectre of anti-austerity, democratic socialism that haunts Europe. Tim's most famous space vlog so far shows him explaining to viewers how to add milk to tea in space - an experience that fellow astronauts have described as more disgusting than using a space toilet.