Heavy security patrols are to be expected day and night at the 2012 Summer Games in London, England. 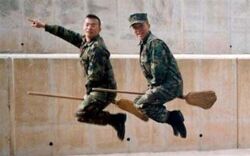 Skies over Great Britain will be closely guarded.

LONDON, England In what was sold as a 'Hitherto before unseen demonstration of preparedness and leadership' the Long Range Reconaissance Patrol (LRRPs) section of the privately owned "British Royal National Security Guards Association" have unveiled their top-secret plans and techniques that they will implement to provide security for the 2012 Summer Olympic Games. For well over 16 months this team has been training "super-duper hard" said Clyve Montgomery, Chief Public Relations Officer. "They've woken up extra early, performed calisthenics, practiced communication techniques, and lastly, marched a lot and everything. We've tried really hard to get into tip-top shape and we hope the British Empire will be proud of us."

Nutrition "Our mornings begin with massage, a tepid soothing soak in a spa, and a nutritious high-fibre meal. Our motto is, "We are what we eat." Therefore, we prefer Mom's Best Honey Nut Toastie-O'sfor carbohydrate loading, Tanginstant breakfast drink for hydration, and Kelloggs Pop Tarts to "stuff in our little pockets should our tummies go 'grumbly-wumbly' later on in the day. After nutrition we go on a refreshing walk-a-bout and then get down to the nitty gritty of training right away."

Communications "What would a security force be without communications? All of our drivers are in constant communication with gunners and auxillary personnel. We've got satellite phones, personal radios/walkie-talkies, and in the event that someone doesn't feel comfortable we each have 'safe' words. Mine is "Bath". For example, should I feel uncomfortable in a particular situation, all I need to do is say the word "Bathe" and the others know to release me, to let me alone, to let me have some 'me' time. I highly doubt that terrorists have safe words, let alone personal walkie-talkies." 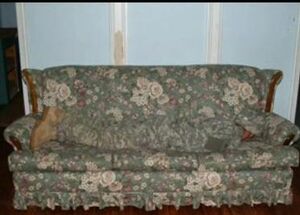 Remaining undetected is a key facet of covert operations and the gathering of enemy data. 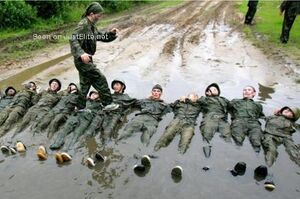 The Corps of Engineers prepares and tests their bridges before implementation.

Silent but Deadly "The element of surprise is of great value to security forces world wide. We've implemented a number of training techniques unique to our urban Western environment. It came as no surprise to our team that probably one of the most difficult animals to sneak up on is the common tom-cat. Several of the troops have their own felines at home and are encouraged to practice the "quick draw" and the "sneak up on the old cat" trick to improve their stealthy walking techniques. As you can see by the photo to the right, this soldier has effectively snuck up on a tom-cat and drawn his weapon in complete surprise. Were this to be a terrorist, quite obviously he would have little choice but to comply with our security ops team. 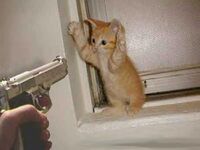 Stealthiness is a key focus for the security team.