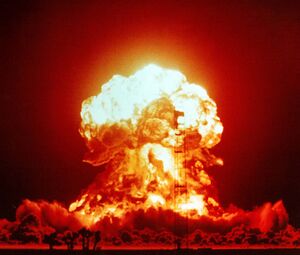 BOSTON, Massachussetts, United States of Anarchy — At 7:30AM, the height of rush hour in Boston, when the city burgeons from Oh-My-God-A-Shitload-Of-People to Oh-My-God-An-Assload-Of-People-Rushing-To-Work, the city was thrown into chaos as ten small nuclear devices were detonated around the Boston Metro Area. According to reports, the devices were attached to streetlamps, bridges, underpasses, and in subway stations to maximize the amount of destruction and death.

In the aftermath, an eleventh device that failed to detonate was found affixed to a street lamp in Deadham, a somewhat ironically named suburb of Boston. Police stated that the devices, "Appeared to be part of a harmless viral marketing campaign aimed at promoting the upcoming Aquateen Hunger Force movie. We're all big fans, so nobody suspected their dangerous nature until it was too late." The devices apparently had the visage of an 8-bit video game character that was flipping off passers-by for over two weeks before they detonated.

It is estimated that 76% of the population in the Greater Boston Metro Area are dead, with the remainder in serious danger of dying from radiation and lack of weed in the coming days.

Washington has not said who is at fault yet, however serious condemnation has flowed from the seat of power of the United States. "These devices have strong links to North Korea, Iran, Syria, China, Venezuela, Russia ... Aww, fuck it, Muslims and god-damned Commies, the entire Axis of Evil is out to get us," said a Whitehouse spokesperson. President Bush has stated that we will take "decisive action against the perpetrators of this heinous act of terror". FEMA has been deployed to the region to ensure that Niggers, Retards, and Cripples are killed so they won't take resources from stronger White survivors.

In a nationwide press conference The Department of Homeland Security stated that "We must be vigilant against a common foe, one who will strike us down, who will use the benign to mask the dark seed of hate, and we blame these attacks on the new Democratic majority in Congress". A Gallup Poll following the press conferece showed President Bush with his highest approval rating since immediately following 9/11.

Our local correspondent, Reverend Zimulator, was unharmed in the attack and between puffs on his doobie, stated that it was "the most bad-ass fireworks show I've ever seen! Like an LSD trip, only with more screaming, running, and house fires. Oh, I miss those days with the house fires." as he takes another long drag from his joint, "Yeah, man, and I have enough of this good shit to last me until the government has restored order. I'll be fine. No big deal. Hey, want a drag?"

Several corporations have reacted positively to this incident. Microsoft announced that it will release a new version of Windows with better immunity against EMP shockwaves. Unfortunately, this Boston shockwave is several orders weaker than a single shot from a Super Star Destroyer.