UnNews:Body of last World War I veteran to be shot to moon 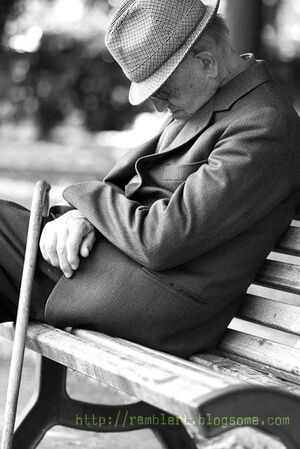 Frank Buckles' body, held up by a stick, is temporarily being stored on a park bench near Alexandria, Virginia. The bench itself contains graffiti put there by a failed '90s dot.com company in their last bitter attempt at notoriety.

WASHINGTON, D.C. -- The White House announced today that the body of Frank Buckles, the last surviving U.S. veteran of World War I who died last week at the age of 110, will be shot to the moon.

"Frank Buckles represents an entire era, and all that was good about America in the 1910s," Barack Obama's ghostwriter was quoted as saying. "Ice cream socials, frills on umbrellas, Ty Cobb sliding into third and Honus Wagner beating out a single, pretty petticoats on thin women, and hundreds of thousands of dead bodies strewn along France and Belgium where the troops of forty nations pummelled each other back-and-forth along a quarter-mile wide and thousand mile long strip of godforsaken trenches for several dreary and disease-ridden years. Well, in the case of America, for several weeks. But Frank Buckles survived them all, even Cobb, God rest both their souls. So what the hell, we're going to send his body to the moon."

Buckles' body will lift off from Cape Canaveral next Friday aboard a secret Air Force test rocket, the JFK-47, and be deposited on the moon a few days later. It will not be equipped with a spacesuit, but will be dressed in Buckles' World War I uniform which he'd kept mothballed and stainguarded all these years.

"We're hoping to guide him to a soft landing on the moon's surface so he can be seen by the Hubble telescope," said former astronaut and Senator John Glenn, the previous record holder for old people in space. "Then, when Americans go back to the moon in the decades to come, we will eventually be able to prop Buckles' body up and position it to salute the American flag. When we lose the last veteran of the second World War, God willing he is an American, we will add that body to the diorama. We're thinking of grabbing up Armstrong's and Aldrin's remains for this deal too. Then you'll really see a show worth the price of admission."

Frank Buckles' family is protesting the removal of their relatives body from the park bench where it was being stored in anticipation of either a lying-in-state in the Capitol Building or a service at Arlington National Cemetery. "His family is irate over plans to shoot Mr. Buckles to the moon," said family spokesperson Gloria Allred. "Just because Obama thinks he can capitalize on World War I to boost his sagging approval ratings that is no reason to put the Buckles family through the pain of having to glance up at the moon at night, knowing that the man in the moon is great-grandpa Frank. And what if they louse it up and he's standing on his head up there? Pain and suffering, that's where the big bucks roam."

The public's reaction to the plan is reflected in a New York Times-CBS poll of 2,000 college students. 4% of them approve of the plan, 9% disapprove, 16% hope that man is able to conquer the heavens and get to the moon someday, and 71% had never heard of World War I.