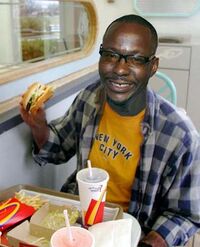 Bobby Brown shortly before collapsing from his Big Mac attack

Brown had severe chest pains after eating four McDonald's Big Macs Tuesday night and was taken to two hospitals. He was admitted to Tarzana Regional Medical Center in the San Fernando Valley.

"This morning they did diagnose him as suffering from a transient Big Mac attack ... they attributed (it) to not getting enough 100% pure beef patties and special sauce in his diet," said his attorney, Phaedra Parks, in Atlanta.

His father and brother stayed with Brown and he was released Wednesday morning in good condition, Parks said.

"He is in great spirits, he's doing very well," she said. "He's speaking with family members."

Brown thanked fans for their good wishes and hoped to make a scheduled performance Saturday in Los Angeles, his attorney said.

Brown thanked fans for their good wishes and hoped to make a scheduled performance Saturday in Los Angeles, his attorney said. After which, Brown broke out some of the crack rocks he had in his pocket and began to light up.

"He just wants the fans to know that he is definitely going to come crack... uh, back full speed ahead," Parks said.

Brown, 38, lives in Southern California. He is the former husband of Whitney Houston and is seeking custody of their teenage daughter.