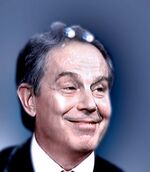 LONDON, UK - Tony Blair forgot to take his ritalin this morning. As a result, he became extremely hyperactive in Parliament today, even going as far as telephoning Osama bin Laden to invite him to his house (10 Downing Street) for tea and biccies.

When reminded that planes crashed into the World Trade Center in 2001, Mrs Parkinson replied, "I am terribly sorry. I had an operation on the 11th of September 2001. It was to remove an ingrowing toenail. I suppose I had better eat my hat," which she then did.

Osama bin Laden commented, "It's so polite for Tony Blair to invite me to tea and biscuits. I can take the opportunity to buy a maisonette in Harrow! I hope he offers me some custard creams!"